Wout van Aert took the Belgian road race title by a whisker in his first race after recovering from appendicitis. It was Van Aert’s first race back after recovering from appendicitis, his last appearance being Amstel Gold in mid-April, which he won from Tom Pidcock (Ineos Grenadiers) by the smallest of margins. Sunday’s National Championship race also ended in a photo finish which showed Van Aert finishing ahead of Edward Theuns (Trek-Segafredo), with Remco Evenepoel (Deceuninck-QuickStep) settling for third.

“It was a difficult final when Theuns joined us,” Van Aert told Sporza after the finish. “I wanted to trust my sprint but I had to carry the weight of the breakaway too. It was very close. It looks like I always have close finishes in the sprint.”

Van Aert was national ITT champion for two years running, but this is his first Belgian road race title.

“It’s one of the most amazing jerseys in the peloton and I wanted it,” said Van Aert. “I want to dedicate this title to my mate who died of bone cancer last month. I have been thinking about him a lot and fought to get back here. I thank him for giving me the strength to be here. I think I can get much better [after appendicitis]. In the end I was in the right break. Under the circumstances, this means a lot to me and gives me confidence ahead of the Tour de France. I had doubts ahead of this race and I am happy to leave for France with this jersey.”

After proving integral to Primož Roglič’s Tour de France campaign in 2020 – taking his own stage wins along the way – Van Aert was included in the 2021 Tour team when it was announced way back in January. Though overall victory with Roglič has always been the team’s main goal, the newly crowned Belgian champion had set his sights on an early stage win and a stint in the yellow jersey himself. However, an unpleasant bout of appendicitis following a successful Spring Classics campaign put a big dent in his training and forced him to downplay his chances, focussing instead on performing a team role. But in the iconic jersey of Belgian national champion, a stage win is surely back on the table.

Runner-up Edward Theuns had a lot riding on this event too, and though he comes away disappointed, he hopes it will still have a positive outcome in the coming days.

“I believed I could win or I wouldn’t have waited for the sprint,” Theuns said. “I made a small gearing mistake, I am very disappointed. I’ve had a difficult few weeks. The team has doubts about me, whether to take me along to France. I’ve show that I have a place in the Tour de France. I raced up to these two phenomena [Evenepoel and Van Aert] on my own. I knew it was going to be hard. I hoped to beat Wout in the sprint but I waited a little bit too long. I hoped to jump from the wheel. I wondered about going one gear higher but I didn’t in the end. I tried. This might have been the opportunity of a lifetime to get the title. It hurts that the team has doubts. I hope I still make the Tour team.” 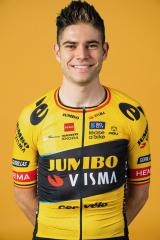