Patrick Konrad solos to victory on stage 16 of the Tour de France.

Patrick Konrad took his first ever WorldTour victory on Tuesday at the Tour de France, soloing out of the breakaway to win a cold and wet stage 16.

The 169 km stage from El Pas de la Casa to Saint-Gaudens saw a fierce battle to get clear of the pack in the early goings. Chris Juul-Jensen (BikeExchange), Jan Bakelants (Intermarché-Wanty Gobert), and Fabien Doubey (TotalEnergies) finally broke away with around 90 km to go, and then a group of chasers formed in pursuit of that trio, with Konrad, Michael Matthews (BikeExchange), David Gaudu (Groupama-FD), and Sonny Colbrelli (Bahrain Victorious) among those in the selection.

As the peloton began to allow the gap to those up the road to grow, Konrad jumped out of the chase group to bridge up to the leaders with around 70 km to go. Juul-Jensen dropped shortly thereafter, leaving three riders at the front, with the chase group hovering around half a minute back.

Konrad made his move on the day’s penultimate climb, the Cat 2 Col de Portet-d’Aspet, soloing clear with around 35 km to go and immediately building up a decent gap. Behind, Gaudu and then Colbrelli jumped from the chase group in pursuit, and they crested the climb only around 20 seconds behind Konrad, but the 29-year-old Austrian extended his lead on the descent.

He took a lead of just over a minute into the last 10 km as Gaudu and Colbrelli were reabsorbed by the chase group. Konrad held on over a final Cat 4 climb and arrived alone to take the win with a 42-second advantage over the pursuers. Colbrelli sprinted to runner-up honors on the day while Matthews took third, with both adding significant points on the day to their totals in the points classification. Overall leader Tadej Pogačar (UAE Team Emirates) arrived safely with the peloton to maintain his position atop the GC standings. 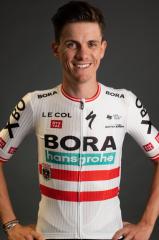