Matej Mohorič takes his second stage win of the 2021 Tour.

Mohorič joined a six-rider early break that got clear almost immediately after the start of the 207 km stage from Mourenx to Libourne. The peloton allowed the escapees to build a gap of a few minutes at first but kept the pace high until the intermediate sprint. When the speed in the pack dropped after the sprint, however, a new selection of attackers shot off the front in pursuit of the lead group.

The new group of escapees bridged up to form a new 20-rider lead group near the midway point of the stage. The peloton was less than a minute behind as two groups up front merged, but then the gap started to grow rapidly. With 50 km to go in the stage, the gap was up over 10 minutes as it was becoming clear that despite the flat profile, Mark Cavendish (Deceuninck-QuickStep) would not have a chance to sprint for his 35th career Tour stage win on the day.

The final hour of racing saw several attacks and counterattacks in the lead group, with some riders being shed out the back as others went off the front. Mohiric followed moves and was still there with nine riders left inside the last 30 km, and then, with 25 km to go, he made his move.

He quickly powered to a sizable gap as his fellow escapees coalesced into a group behind him, and he took nearly a minute into the last 10 km. There would be no catching him from there. The former under-23 world champion held on to take the stage 19 victory by 58 seconds, with Christophe Laporte (Cofidis) sprinting to runner-up honors ahead of Casper Pedersen (DSM). Tadej Pogačar (UAE Team Emirates) and the rest of the GC contenders arrived nearly 21 minutes down with no changes at the top of the GC standings. 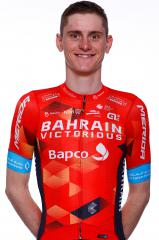