Matej Mohoric won stage 7 of the Tour de France out of the breakaway on a day that saw a major shakeup in the GC battle.

Matej Mohorič (Bahrain Victorious) won stage 7 of the Tour de France out of the breakaway on a day that saw a major shakeup in the general classification battle.

A big breakaway featuring got clear in the early goings of the stage and it ultimately stayed away, allowing some big names to make big gains in the overall standings. Race leader Mathieu van der Poel (Alpecin-Fenix), Wout van Aert (Jumbo-Visma), Vincenzo Nibali (Trek-Segafredo), and Simon Yates (BikeExchange) were among those up the road in the move.

Mohorič put in his solo attack out of the break on the day’s penultimate climb, the Cat 2 Signal d’Uchon, and he immediately worked out to a hefty gap. Behind, the chasing peloton hit the climb a few minutes later. Primož Roglič (Jumbo-Visma) was dropped on the ascent, while Richard Carapaz (Ineos Grenadiers) attacked off the front of the pack. As the Movistar team took up the chase, Carapaz’s Ineos Grenadiers teammate Geraint Thomas was briefly distanced, although he would ultimately get back into the pack.

Mohorič would hold on to win the stage, with Jasper Stuyven (Trek-Segafredo) taking runner-up honors 1:20 back and Magnus Cort (EF Education-Nippo) leading a small group across the line in third. Nibali and Yates arrived together 2:57 back, while the peloton, having swept up Carapaz just before the line, finished 5:15 down. Roglic would not arrive until nearly four more minutes had past, his GC hopes fading four days after he crashed heavily on stage 3.

When all was said and done, Van der Poel had retained his race lead and extended his gap over most of the pre-race favorites, with Van Aert now sitting second, 30 seconds back. Defending champion Tadej Pogacar sits fifth overall, 3:43 down. 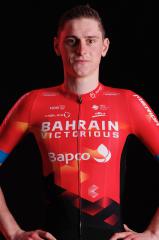