Neilson Powless (EF Education-Nippo) took a fantastic win at the Clásica San Sebastián, out-sprinting his two fellow attackers at the end of a long day in the rain.

The day’s breakaway took a long time to establish, finally riding away from the peloton on the longest climb of the 223.5 km route. The 13-strong group was kept at a steady four minutes for the lumpy middle section of the race, until they hit the lower slopes of the Jaizkibel. Within a few kilometres, Javier Romo (Astana-Premier Tech) had dropped the best climbers from the breakaway and pushed on.

On the penultimate climb, Mikel Landa (Bahrain-Victorious) accelerated away from the peloton to end Romo’s day out front, taking Simon Carr (EF Education-Nippo) with him. It was Landa’s first race since crashing out of the Giro d’Italia, but his time in the spotlight was short-lived, as Carr soon climbed away from the spaniard. The young Brit spent about 20 km solo until a he was joined by small group of chasers, including teammate Neilson Powless, Mikkel Honoré (Deceuninck-Quickstep) and Matej Mohorič (Bahrain-Victorious), just inside the last 23 km. From there on, their gap only grew, and the group held over a minute by the decisive Murgil-Tontorra climb.

After trying to leave them behind on the steeper gradients, Powless kept his cool when Mohorič and Honoré rejoined him. A sketchy descent back into the town of Donostia followed, and the American was the only one to escape drama on the wet roads. On the finishing straight, Mohorič was forced to lead the closely-fought sprint, and Powless powered through the middle to take his first professional victory. Mohorič held on for second and Honoré settled for third. 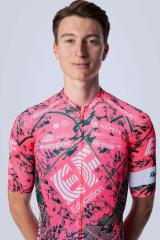