Nils Politt takes his first WorldTour win after a long day off the front.

Nils Politt (Bora-Hansgrohe) won stage 12 of the Tour de France after a long day off the front.

The 27-year-old German was one of several strong riders to jump into the break as crosswinds buffeted the race in the early goings of the 159.4 km stage from Saint-Paul-Trois-Châteaux to Nîmes, and the peloton allowed the escapees to get out to a sizable advantage on the day.

Politt kicked off a flurry of attacks out of the break with around 50 km to go, and with around 35 km to go, he joined Harry Sweeny (Lotto Soudal), Stefan Küng (Groupama-FDJ), and Imanol Erviti (Movistar) in getting clear of the rest of the break. Despite the presence of big engines like Julian Alaphilippe (Deceuninck-QuickStep) in the second group, the quartet quickly worked up to a healthy gap. With 20 km to go, it was clear that the stage win would come out of the four riders out front.

Sweeny put in an attack that only Politt and Erviti could follow, dropping Küng. Then, with 12 km to go, Politt but in a big dig. Sweeny and Erviti hesitated at first, and that was all Politt needed to power to an advantage that the two chasers could not close down.

The 2019 Paris-Roubaix runner-up held on through to the finish to secure his first WorldTour stage win. Eriti took second ahead of Sweeny 31 seconds later. Fifteen minutes behind, the Tadej Pogačar and the rest of the GC riders arrived safely with the peloton. 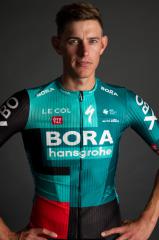 The Tour Daily Podcast: Jumbo messed that one up