The Slovenian put more than a minute into his closest rivals.

Primož Roglič (Slovenia) has bounced back from a frustrating Tour de France to win the individual time trial at the Tokyo Olympics.

Thirty-nine starters took to a tough course around Japan’s Fuji International Speedway, tackling two laps of a 22.1 km circuit in overcast conditions. Nikias Arndt (Germany) set the early marker with a 58:49 but was immediately dethroned by South Africa’s Stefan De Bod (57:57) and then Canada’s Hugo Houle (57:56).

Houle had an extended stay in the hot seat until Remco Evenepoel (Belgium) rode to a new best time of 57:21. The 21-year-old lost the lead mere moments later when Rigoberto Uran (Colombia) stopped the clock a further two seconds faster.

The big favourites then took to the course and immediately set about posting the day’s fastest intermediate time checks. Dumoulin set a new best at the halfway point, with Roglič the only rider able to go faster. Right there in contention were world champion Filippo Ganna (Italy), Dennis, and Wout van Aert (Belgium).

At the finish Dumoulin posted a new best time of 56:06, taking more than a minute off Uran’s marker. Then, after passing and being passed several times by his ‘minute man’, Kasper Asgreen (Denmark), Roglič stopped the clock another 1:01 faster than Dumoulin. It would ultimately be the winning time, with Dennis, Ganna, and Van Aert all unable to get within a minute of the Slovenian.

Roglič’s victory comes roughly three weeks after he abandoned the Tour de France, having crashed heavily on stage 3. For Dumoulin, the silver medal caps an impressive return to the sport after taking roughly eight months off to focus on his mental health. 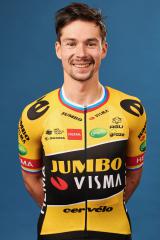