Van der Breggen and Rivera were part of a four-rider move with Lizzie Deignan and Elise Chabbey. The 2021 Giro Donne wrapped up on Sunday in Cormons. Coryn Rivera (Team DSM) won the final stage from a breakaway of four while Anna van der Breggen (SD Worx) finished fourth on the stage to secure her fourth overall victory at the women’s Giro d’Italia Internazionale Femminile.

Van der Breggen claimed the pink jersey from Ruth Winder (Trek-Segafredo) on the mountainous stage 2 and held the lead all the way to the finale. She also won the individual time trial on stage 4.

Rivera’s stage win is the first victory for the American rider since stage 4 of the Lotto Belgium Tour in 2019. 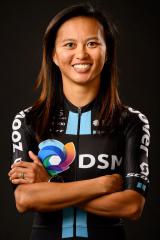