Jackson now leads the overall, tied on time with Marianne Vos, ahead of the stage 2 time trial. Lorena Wiebes (Team DSM) was the first finisher from the bunch, taking third, four seconds behind Jackson. Race leader Marianne Vos (Jumbo-Visma) finished fourth but Jackson took the overall lead thanks to the bonus seconds at the finish.

Jackson was the first to attack early in the stage. She rode the first 25 km solo until Grossetête and Nina Buysman (Parkhotel Valkenburg) joined the breakaway 35 km into the stage. Jackson and Grossetête lost Buysman with a few kilometres remaining when it looked like the peloton was closing in.

The chase from the peloton was on and off, with Team DSM and Canyon-SRAM taking turns at the front. Jumbo-Visma, the team of the race leader, wasn’t seen until the final kilometres. By then it was too late to bring the two out front back in time for a sprint finish. 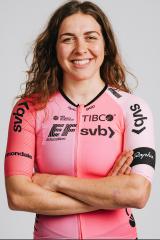