Benoit Cosnefroy (AG2R-Citroën) was outnumbered by Deceuninck-QuickStep riders, but he won the Bretagne Classic anyway.

Benoit Cosnefroy (AG2R-Citroën) won the Bretagne Classic from a three-man group, outnumbered though he was by Deceuninck-QuickStep. The young Frenchman is a prolific winner on French soil, but this marks his first WorldTour victory.

“I’m really happy, it’s my first WorldTour win,” Cosnefroy said at the finish. “I’ve been waiting for it so of course, it’s brilliant. It was a really exciting race today. It was just me against the two Deceuninck guys at the end. I knew I felt good that I could go with Julian when he attacked. Of course, it’s a different sprint here. I knew I could do something, I was confident.”

Cosnefroy had followed a move initiated by Julian Alaphilippe at 64 km to go, Mikkel Honoré joining them in the race to the finish. For the most part, the trio worked well together, but Alaphilippe and Cosnefroy traded blows of the verbal kind earlier in the stage. Wary of his company, the AG2R-Citroën rider was eager to lose at least one of the Deceuninck-QuickStep riders, but the world champion refused to work when Cosnefroy’s attack dropped his teammate.

“I also played my card when I was at the front but I did collaborate with them, I didn’t just leave them to ride,” Cosnefroy said. “I tried to attack and I would have hoped to go [alone] with Julian, but in the end, I was happy to win it how I did. With me, Honoré, and Julian there is no problem at all. We are just representing our own jerseys – that’s racing, there is no personal problem there. I was a bit unhappy at the time but that’s just racing.”

At 251 kilometres long and with a distinctly jagged profile, the Bretagne Classic looked set to deliver a one-day battle of Spring Classic proportions.

The only things that could interrupt proceedings for almost 200 km were a few spills, some of them quite unpleasant. The first sign of real change was the appearance of Tim Declercq (Deceuninck-QuickStep) who resumed the familiar task of cutting down the break’s advantage with about 75 km left to race.

With his team setting the pace, Alaphilippe launched an attack on the gravel climb of the Bosse Saoutalarin at 64 km to go. Tadej Pogačar (UAE Team Emirates) was straight on his wheel, with Cosnefroy and Honoré following. They steadily forged a gap, scooping up dropped breakaway riders as they went.

In his first race since the Olympics, Pogačar ran out of gas with 48 km to go, almost grinding to a halt at the roadside after seeming to struggle for several kilometres. The remaining three raced on, catching last-man-standing De Marchi just outside 30 km to go.

Keen to shake Honoré, Cosnefroy accelerated hard a few kilometres later and Alaphilippe was quickly on his wheel. However, the world champion was not willing to share the work – unsurprisingly – which led to some wild gesticulations from Cosnefroy as Honoré chased back on.

Back together again, the trio’s lead yo-yoed significantly as attacks fired frantically from the desperate peloton, but they held onto just enough of a gap. Both Alaphilippe and Cosnefroy launched attacks in the last 3 km, but Honoré was back in time to lead them out in the final kilometre.

Despite his disadvantage, Cosnefroy was fastest in what seemed like a painfully long sprint, going shoulder to shoulder with Alaphilippe who had to settle for second. Honoré finished third just ten seconds before what was left of the chasing bunch. 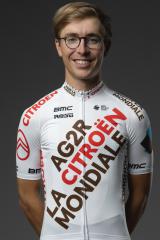