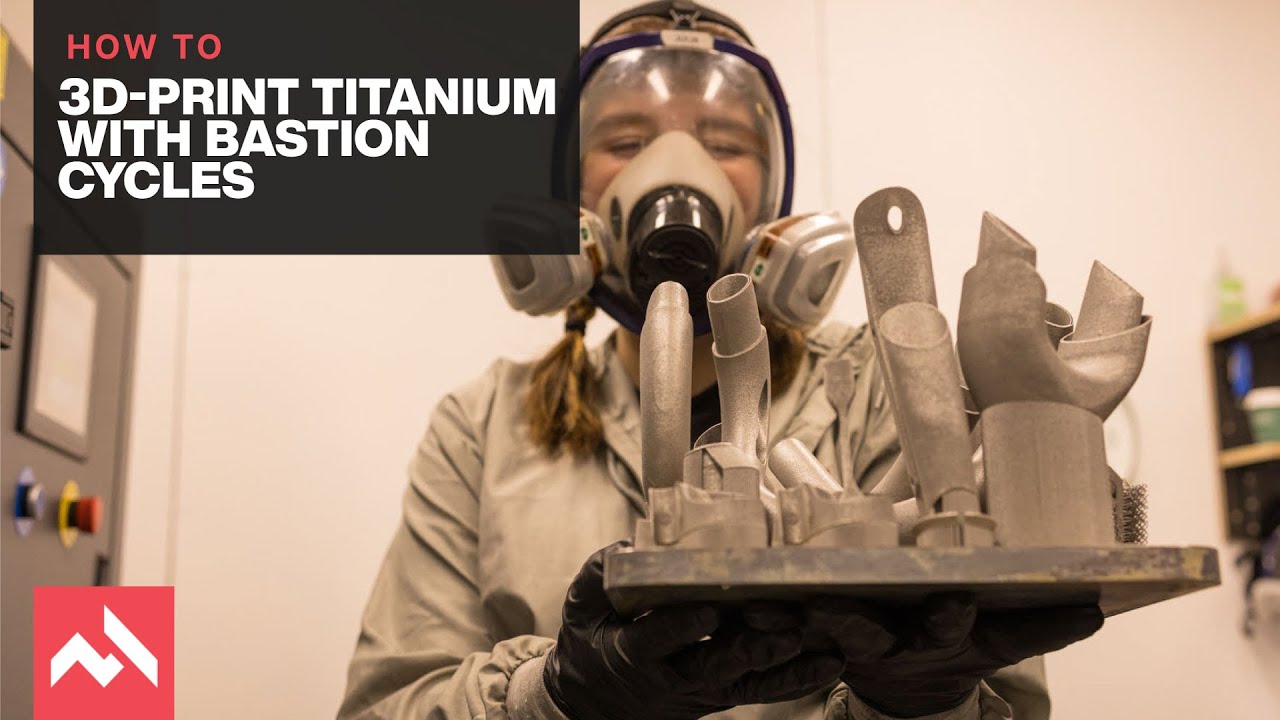 A look behind the curtain at how a computer sketch becomes a rideable bicycle.

Modern technology is continually opening the door to new ideas. Metal hydroforming, computer-controlled milling, and laser cutting are all now commonplace within bicycle parts manufacturing. And while still niche in its usage, you can add 3D printing to the list.

When it comes to 3D printing metal for bicycle purposes, few have more hands-on experience than the Melbourne-based team at Bastion Cycles. They first used 3D-printed titanium lugs in 2015 to produce the first custom road bike of its kind and the brand continues to refine the technology today. For the past three years, the young Australian company has relied on in-house printing capabilities.

Bastion uses its 3D metal printers to produce the titanium lugs that dictate the custom geometry and stiffness of its carbon tubed bicycles, and as of this year, the brand’s now producing its own forks and cockpits, too. The company also produces frame components for renowned Australian custom builders such as Prova Cycles, Baum Cycles, Devlin, Mooro, and more.

So what exactly is 3D-printed metal? What processes are involved? And what are the limitations? To answer these questions, we sat down with Bastion’s co-founder and engineering director, James Woolcock.

Step one: The data

Before building any parts, you need the data to tell the printers what to print. In this sense 3D printing isn’t all that different to printing a digital photograph or operating a CNC milling machine – you have to have a design and the data of what you’d like to make.

“Our core strength is parametric modelling,” Woolcock said. “We generate the CAD (computer-aided design) model of what we want to print. In our case [that data needs to] have the structural lattice supplied to the inside and then we use a thin wall outer skin and structure.

“We then prepare that data [through another computer program – ed.] to be sliced in a way that the printer can read. That becomes a 3-4 gigabyte file transferred to the printer and that instructs the printer to direct the laser beam to just the portion of the cross-section that we’re building at a time.”

Step two: On to the printers

“The metal 3D-printing we do is with titanium, and we run two Renishaw machines that use a laser to melt titanium powder layer by layer,” explained Woolcock of how the parts build up in an additive fashion.

The process is basically like welding metal, but rather than melting pre-existing metal pieces together, it happens one dust particle at a time. Each of Bastion’s printers features a single laser that melts the fine layer of titanium powder in place. That happens at an insanely high temperature – about 1,700 °C – and that means an inert gas must be used (argon in this case) to purge the chamber of any oxygen.

(Such oxygen purging is common in more traditional titanium welding methods to ensure consistent results, but the temperature used here means the titanium powder would ignite if not in the presence of an inert gas).

With each layer, the machine adds more powder until eventually, the pieces are built up into a useable part.

“Eventually” is perhaps the key. In Bastion’s case, those usable parts typically take two full days – 48 hours – to be printed. Bastion makes effective use of that time by printing multiple parts on a single print bed. “We tetris parts in [to the available space] and fill it as much as we can each build,” Woolcock said.

“In that time we’re printing what’s effectively the lugs of the bicycle, the bottom bracket, head bracket, seat bracket and dropouts, as well as the seat topper. For our bicycle frames, we bond those lugs together with carbon fibre tubes. We’re also making a variety of other components and parts in titanium.”

Table size is often the limitation of what can be printed. “Our machines have a build envelope of 250 mm square and as high as 330-340 mm high,” said Woolcock of what equates to a roughly one-foot cube of printing potential. “You need quite a bit of [titanium] powder on hand to print that high.”

Not only is the print process slow and the titanium powder extremely expensive, but it’s also potentially hazardous, too. As a result the printers that Bastion uses sit within a sealed clean-room. When the fine powder is exposed – such as when a print is finished – staff are required to wear overalls and respirators as the unmelted material is both flammable and dangerous to the lungs.

With the print done a staff member will retrieve the whole build plate and carefully remove the leftover powder. This excess titanium powder is carefully sifted out. The loose particles that have been touched by the laser are collected for titanium scrap recycling, while the virgin powder is kept for the next print run.

The entire build plate is now ready for the next stage.

“There is still residual stress in the parts from the printing process,” Woolcock said. “The build plate goes into a furnace under argon, and it goes through a heat treat and annealing process. Then the parts are strong and good, and ready to go.”

Step five: Testing and parting out the pieces

Take a close look at the printed parts and you’ll see some skinny tabs that look more like cocktail skewers than anything useable for cycling. These are specifically printed to do batch testing – something Bastion does with each and every print run.

“We do test samples on every build to ensure we’re getting the yield strength and elongation we expect,” Woolcock said. “From that point the parts on the build plate can be cut off, the sacrificial supports needed to hold the parts are removed. And then those parts move into machining.”

The metal build plate (which the parts are printed on) is also machined and polished, ready for re-use with the next print.

“The parts that come out of the printer [and then furnace] are still not 100% ready to be used, especially if they’ve got a bearing interface, or a precision fit portion, threads that need chasing [cleaning up], etc,” Woolcock said. “So there are quite a few machining operations depending on what the end use of that part is.”

Bastion recently invested in its first CNC mill to assist with a number of the machining processes, such as cleaning up its T47 bottom bracket shells after printing.

“We have quite detailed surface finishing,” Woolcock said. “You’ll see [that] the surface finishing straight off the print still has a degree of grain. We offer different levels of finish on our bikes: blasted finish, polished, etc.”

Bastion employs a number of different methods depending on the requested finish. The company has a tumbler machine to assist with much of the manual labour, but much of it is still done by hand with the aid of polishing tools (think bench grinder with polishing pads). It’s dirty work.

“So once the build went down to print, another drawing was done for carbon fibre tube preparation,” Woolcock explained. “So the tubes are being cut to length specific to that frame. And the titanium and carbon pieces come together in our carbon composites lab.

“We have quite an elaborate bonding process to work through so that the parts are completely clean and that both sides of the bonded parts are ready for the two-part epoxy that we use.”

Where 3D printed metal is headed

Clearly, Bastion has been able to create a successful small business through the use of 3D-printing metal, and they’re not alone. There’s increasing demand for the technology, and we’re even seeing brands such as Silca and Pinarello now employing the technology.

However, Woolcock still sees it as a rather niche manufacturing method. “This is not a mass production technology, it’s better to think of it as a customisation technology,” he said. “You’re not trying to make thousands of things a day; it’s about being able to do something subtle each time.

“It’s not going to be as fast as stamping parts, or as fast as hydroforming parts. There still needs to [be] a strong reason to choose to print, whether it be customisation or ultra-lightweight / high stiffness-weight ratio.”

Bastion remains highly invested in metal 3D printing and is continually working to find useful applications for the technology. In addition to creating parts for other makers, the company is producing approximately 200 of its own bikes a year and is currently tooling up to produce a bike a day.

The cost of the machines and raw materials also means there are significant barriers to entry. Print speeds are progressing, and the latest machines feature quad lasers versus the single-laser versions Bastion employs. But still, the technology is fundamentally the same and the eventual printed product is no different.

“The next frontier is the automation of a lot of the ancillary functions around the machine,” Woolcock said. “The machines we run are manually sieved and so we’re manually handling the powder. And the heat treat process is done separately for us, too. There are machines coming onto the market that are more end-to-end that do all their own internal powder handling and heat treat process and can then reload a build plate for themselves and keep going.”

So what about printing larger pieces of a bike, or even a whole frame? “A larger [print] bed maybe lets you do different things, but you’re still limited by the speed [this directly corresponds with an uneconomical cost – ed.] Getting a larger bed doesn’t mean you’ll be able to get more out the door. I don’t see in the next few years anyone printing an entire bicycle in one go, at least with this technology. There are different types of additive manufacturing that claim to be able to print a whole frame in one go, but it’s not going to have the right properties required.”

CyclingTips visited Bastion while in town for the Handmade Bicycle Show Australia. That factory visit also resulted in a sit-down with Mark Hester of Prova Cycles about all things geometry, plus more content which is still to come.

It has come to our attention that a number of readers believe this article was posted in response to what happened to the Australia team pursuit squad at the Olympics. Please note that this feature was coincidentally published some eight hours before the incident occurred. We wish Bastion Cycles and the AusCycling team all the best in diagnosing the cause of the product failure.