Kristen Faulkner (Team Tibco-SVB) narrowly held off a reduced peloton to win the first stage of the Ladies Tour of Norway. Behind, Susanne Anderson (Team DSM) and Alice Barnes (Canyon-SRAM) sprinted to second and third, respectively.

Faulkner escaped a breakaway of five with just over 20 km to go and continued on the final circuits in Sarpsborg alone. Behind her, Trek-Segafredo took up the chase to reel in those from the early breakaway who remained out front. Faulkner maintained half a minute on the peloton up to the final 7 km when her advantage dipped. In the front of the peloton, Marlen Reusser (Alé BTC Ljubljana) upped the pace and the gap to Faulkner dropped below 10 seconds.

Canyon-SRAM and Team DSM were the next teams to pick up the chase as Faulkner’s gap hovered around 15 seconds. Unfortunately, a crash disrupted the chase with just under 2 km to go, but Faulkner already had enough of an advantage to hold on for the win. 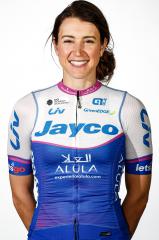