Odd Christian Eiking's run in the red jersey continues with no time lost on stage 12.

Magnus Cort (EF Education First-Nippo) won his second stage of the 2021 Vuelta a España from a reduced peloton after an aggressive day of racing. Andrea Bagioli (Deceuninck-Quick Step) and Michael Matthews (Team BikeExchange) took second and third on the stage.

Odd Christian Eiking (Intermarché-Wanty-Gobert Matériaux) held on to the red jersey with a flat stage on tap on Friday.

The fight for the breakaway lasted most of the stage, with various groups of riders trying their hand up the road. No matter the composition of the break any attempt was brought back by the peloton until the final 20 km when two riders slipped away.

A few general classification contenders crashed with 54 km to go, including Primož Roglič (Jumbo-Visma). Luckily, no one sustained significant injuries.

In the final kilometres, two riders joined the two out front to make a breakaway of four, but there wasn’t enough road left for them to get a significant advantage.

Jay Vine (Alepcin-Fenix) was the last man standing, with Team BikeExchange and UAE Team Emirates putting in the most amount of effort at the front of the peloton. Vine was caught by EF Education First-Nippo with only 500 meters to go right before Cort opened up his sprint. 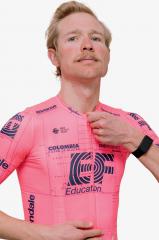