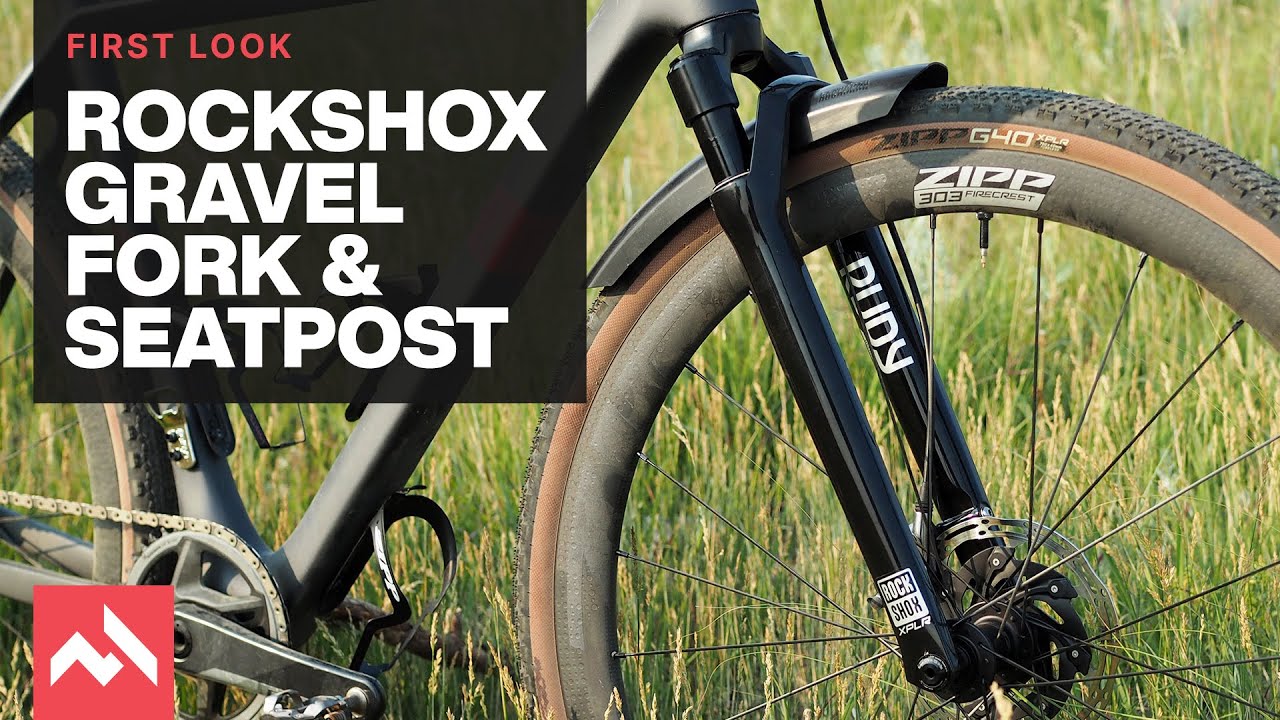 It’s not a question of need when it comes to suspension on gravel, but rather want.

Do you really need suspension on a gravel bike? The idea of suspension forks on gravel bikes has always been a contentious one, and the bike industry hasn’t exactly done itself any favors given what was available early on.

Several of the most popular ones were just chopped-down obsolete mountain bike forks, and they looked and rode like them. They were heavy, they were ugly, and the afterthought tuning just didn’t work well enough to convince enough people that they were worth the substantial hit in weight and cost. Cannondale’s Lefty Oliver fork has probably come the closest functionally, but its single-sided design and proprietary hub present its own hurdles to adoption.

That’s about all they have in common, though.

Despite the fact the Rudy Ultimate XPLR is offered with just 30 or 40 mm of travel, the stanchions are actually a little bigger than that old Judy at 30 mm in diameter, and the chassis features all the modern features you’d expect, like clearance for 50 mm-wide tires (in 700c or 650b), an 1 1/8-to-1 1/2″ tapered steerer, a machined crown to trim some weight, compatibility with standard 12×100 mm thru-axles and flat-mount disc brakes, and sleek tapered lower legs that not only have three-point mounts for full-length fenders, but also fittings for an optional mini-fender if you just want to keep road spray and debris out of your eyes.

Inside the Rudy are heavily modified versions of the Solo Air air spring and Charger Race Day damper that are used in RockShox’s mountain bike forks. They’re dramatically smaller and lighter since there’s so little travel on tap, and both are retuned to be more active on smaller bumps. In particular, RockShox has outfitted the air spring with a strong bottom-out bumper that starts to kick in roughly halfway through the travel to keep you from blowing through the limited amount of movement too quickly. On the other side of the crown, the damper has a very firm manual lockout in case you want to limit fork movement on smooth surfaces.

A dedicated gravel dropper seatpost, too

Travel is limited to just 50 mm or 75 mm, and you might assume that the Reverb AXS XPLR is just a shorter version of the Reverb AXS mountain bike dropper. In fairness, there are a lot of visual similarities. The single-bolt head is identical, as is the AXS wireless communication and the removable and rechargeable Li-ion battery (which is the same as what SRAM uses on all of its AXS wireless derailleurs and has a similar 30-40 hours of claimed run time, depending on usage). However, there are some dramatic changes inside to accommodate the 27.2 mm seatpost diameter — the only size RockShox is offering.

The mountain bike version of the Reverb AXS features an air spring and separate oil cartridge that locks the post in its various positions. That smaller diameter doesn’t leave enough room for all of that hardware, though, so RockShox instead went with an all-air system that not only saves space, but also provides a comfort benefit.

Since air is a compressible gas — whereas oil is a non-compressible fluid — intermediate positions engage so-called ActiveRide mode with the Reverb AXS XPLR behaving like a suspension seatpost. It’s not particularly sophisticated movement since there’s no damper, but the firmness can still be tuned by varying the air pressure.

That all-air system also helps keep the weight down along with that smaller diameter and shorter overall length. Actual weight for a 50 mm-travel sample with battery is a rather respectable 560 g — about 100 g lighter than the mountain bike version, and about 200 g lighter than PNW Components’ Coast Suspension dropper when you factor in cable and housing.

As with all SRAM AXS bits, there’s a fair number of customization options, too. Already have a Force AXS or Red AXS drivetrain system and want to plug in a dedicated remote button to actuate the seatpost? Have at it. Or if you have a Rival AXS setup (or any other AXS drop-bar drivetrain and you’re only running a single chainring), you can program the system so that the seatpost opens when you push both main levers (or, alternatively, both remote buttons if you’ve got your bike set up that way).

Suspension is good, but it’s still not for everyone

Now, back to the question I raised at the beginning of this article. Do you actually need suspension on a gravel bike? It’s a question we’ve asked several times before here at CyclingTips, but the answer is more nuanced now that we have better options for gear. Nevertheless, the answer is still … it depends.

I’ve been riding this RockShox-equipped Lauf True Grit test bike for the past few weeks on the dirt roads, gravel paths, and some singletrack here in Boulder, Colorado. Even with relatively beefy 700×40 mm tires fitted, there’s absolutely a benefit to having some proper suspension, especially up front, and despite having just 30 mm of travel on hand. On particularly bumpy or rocky sections, it’s a lot easier to let the bike run since I’m not getting bounced around as much, I’m less worried about denting or cracking a rim, and I have more control and confidence since the contact patch is more stuck to the ground as compared to a rigid fork.

As promised, the Rudy is pretty impressively active on smaller chatter. It’s not as isolating on washboard as a Lauf Grit leaf-spring fork or even the Specialized FutureShock system, but it’s far better than any rigid fork out there. That 30 mm obviously doesn’t sound like much on paper — and it isn’t in reality — but RockShox makes the most of it with a recommended sag of just 5% and that highly progressive spring rate to take the sting out of bigger impacts. I frequently used full travel on test rides, but it was rarely obvious when I’d truly bottomed the thing out.

The steering is quite precise, too, and while the manual lockout is indeed super firm, I didn’t find the need to use it all that much, even on smoother sections of road.

Put more plainly, I was able to just go faster with the Rudy than I would with a rigid fork on a lot of the terrain I was riding, and it’s yet another reminder that weight isn’t everything when it comes to performance.

As for the Reverb AXS XPLR dropper, I think your opinion will depend a lot on your riding background. I can barely imagine riding a mountain bike these days without a dropper, and the more travel the better as far as I’m concerned. It’s just such a performance advantage on downhills to be able to lower your center of gravity and have more room to maneuver your body around. Given the choice, I think I’d take a dropper seatpost on a hardtail than a fixed seatpost on a full-suspension bike; it’s that big of a deal.

The Reverb on my Lauf loaner only has 75 mm of travel, but it still makes a difference on more technical descents. At the very least, it just makes you feel a lot less like you’re going to go over the bars, and you also have more suspension in your legs to suck up impacts. The wireless actuation works nearly as quickly as a cable remote, and it’s super handy that you can customize the AXS system to whatever setup you find most convenient.

This bike came to me with an extra Blip button programmed to actuate the dropper, for example, but I reprogrammed the controls so that a double-side push on the main eTap levers controls the dropper instead.

Technically speaking, you can run a Reverb AXS XPLR even if you aren’t running an AXS drivetrain. However, you then need to set up a standalone SRAM BlipBox and a dedicated remote button, which doesn’t seem worthwhile to me.

As goofy as it sounds, the ActiveRide feature works as advertised, adding an extra layer of cushiness out back on particularly rough sections when I was either too tired or too lazy to stand up. ActiveRide nevertheless doesn’t feel quite as active as the Rudy up front, though, and I found it tricky on the trail to drop the saddle just enough to engage the feature without dropping the post all the way down. Practice helped, but you still only have a 75 mm-wide window to play with — and less if you run the 50 mm option. Even so, it was nice to have at times, although ActiveRide doesn’t strike me as a make-or-break feature.

It’s not an either-or question

If you’re the type of gravel rider who’s regularly tackling stuff that most people would use a cross-country mountain bike for, adding properly tuned suspension is maybe a pretty easy sell. Yes, you’re adding weight, but in those situations, you’re still probably going to end up going faster, and being more comfortable. Again, it’s not just about weight.

However, not everyone rides their gravel bike on mountain bike trails, and not everyone cares about adding all-terrain capability. If you spend most of your time on packed dirt or reasonably well maintained pea-gravel roads, something like the Rudy Ultimate XPLR or Reverb AXS XPLR will simply be overkill — too much weight and cost for not enough benefit. Plus, don’t forget that the Rudy Ultimate XPLR is longer than most rigid forks, so if your frame isn’t already suspension-corrected, you’re going to be affecting your bike’s fit and handling when you bolt one of these on, too.

It’s also important to remember that if you’re looking to add some cush and capability to your gravel bike, there are other options.

For example, Redshift Sports’s ShockStop stem doesn’t have as much travel as the Rudy, nor is the movement nearly as well controlled (and there’s also the issue of constantly varying handlebar angle). But it’s far better than you might expect given the simplicity of the design … and it’s one-fifth the price.

Maybe the only thing you have to deal with is washboard? Lauf’s intriguing (but expensive) Grit leaf-spring gravel suspension fork isn’t always as composed as the Rudy since the motion is undamped, and I personally don’t find the design to steer as precisely, either. But it’s about 350 g lighter than the Rudy, it works better on corrugated surfaces, and requires no maintenance. Then again, it also can’t be tuned for rider weight or preference, and it costs more than the Rudy, too.

One final possibility you might not have thought of is foam tire inserts, such as those from CushCore, Vittoria, Effetto Mariposa, or Rimpact. All of those allow you to run less pressure in your tires for more comfort and grip without having to worry too much about killing your wheels. And while any of those might come off as grossly overpriced pool noodles (honestly, they’re not that rudimentary), Dave Rome and I are rapidly coming to the conclusion that these offer the best bang for buck for how most people are riding their gravel bikes.

So, once again, when it comes to the question of whether you need “proper” suspension on your gravel … well, that discussion is more nuanced these days now that gravel suspension is a lot better than it used to be, but the answer remains the same: it depends.

More information can be found at www.rockshox.com.