The Swiss national ITT champion put in a blistering pace to take the lead from Liv Racing's Alison Jackson. Marlen Reusser (Alé BTC Ljubljana) finally claimed the top step of a WorldTour podium by winning the stage 2 time trial at the Simac Ladies Tour. Reusser, who finished second in the Olympic Games time trial to Annemiek van Vleuten, won with a time of 20 minutes 41 seconds over the 17 km course.

The race leader ahead of stage 2 Alison Jackson (Liv Racing) finished a little over two minutes behind Reusser in 30th position allowing Reusser to claim the leader’s jersey before of a very flat and fast stage 3.

Reusser’s consistent presence at the front of races and her prominence in time trials landed the Swiss rider a contract with SD Worx for the 2022 and 2023 seasons. She won both Swiss road and time trial titles in 2021 and finished second in the time trial at the World Championships in Imola in 2020. 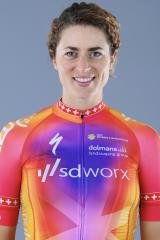