Michael Storer wins stage 7 of the Vuelta a España.

Primož Roglič held onto the red jersey ahead of stage 8. Primož Roglič finished safely with a group of general classification favouriites and held onto the red jersey ahead of stage 8.

With six categorized climbs over 152 km on tap for stage 7, the fight to get into the breakaway took up a good portion of the early racing. Eventually, a large group of 26 riders slipped off the front of the race. The third to last climb on course broke the front group up and with 45 km to go the break was down to 20 riders, with a few collections of chasers behind.

The climb to Puerto El Collao also spurred attacks from the peloton from Alejandro Valverde (Movistar) and Richard Carapaz (Ineos Grenadiers). Unfortunately, Valverde hit a bump in the road and then hit the ground, narrowly missing the barrier on the side of the descent. The former world champion was able to get back onto the road but looked to be nursing his shoulder. Valverde was forced to abandon with 35 km to go.

Meanwhile, Lawson Craddock (EF Education First-Nippo) went on a solo mission from the breakaway with two climbs to go. He was later joined by Storer and Sivakov. The three spent some time attacking each other and Craddock was the first to crack in the final 10 km.

At the base of the final climb Storer and Sivakov were joined by Andreas Kron (Lotto Soudal) and Verona. The front of the race kept changing, with attacks from Verona and Storer as the road narrowed with 4 km to go. Storer was the strongest of the three and was able to take his first WorldTour win in Balcón de Alicante.

Farther down the road Adam Yates (Ineos Grenadiers) put pressure on Roglič, but didn’t gain any time on the red jersey. 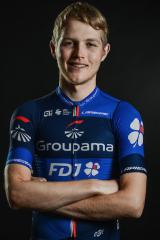 Michael Storer wins stage 7 of the Vuelta a España.