Rein Taaramäe wins stage 3 of the Vuelta a España.

Taaramäe wins stage 3 from the break on the Vuelta's first summit finish.

Rein Taaramäe (Intermarché-Wanty-Gobert Matériaux) powered to his second career Vuelta a España stage win and rode into the red jersey on Monday, winning stage 3 out of the break atop the Picón Blanco climb. Joe Dombrowski (UAE Team Emirates) would take second on the day with Kenny Elissonde (Trek-Segafredo) in third, while behind, a handful of overall favorites would lose time on their rivals.

Taaramäe was in the eight-rider move that went clear about 15 minutes into the 202.8 km stage from Santo Domingo de Silos, and the peloton allowed the break to get a gap of around nine minutes before very gradually starting to bring the advantage down. With 25 km to go, the break still had a gap of eight minutes. While the pace in the bunch was high, no one team seemed interested in doing all of the work in the bunch. Although the peloton did bring the gap down significantly on the run-in to the final climb, the escapees still had around four minutes as they hit the lower slopes of the ascent, where Lilian Calmejane (AG2R Citroën) soloed off the front.

When the rest of the breakaway went into chase mode, a few riders dropped off the back of the group. Taaramäe, Dombrowski, Elissonde, and Julen Amezqueta (Caja Rural-Seguros RGA) ultimately caught back up to Calmejane, and then Dombrowski, Taaramäe, and Elissonde pulled away with around 4.5 km to go. As that trio made its way towards the finish, a handful of notables started to lose touch from the UAE Team Emirates-led peloton, including Sepp Kuss (Jumbo-Visma).

With 2.8 km to go, Taaramee fired off the front and left his breakaway companions behind for good. Meanwhile, Richard Carapaz (Ineos Grenadiers) was dropped from the pack. A few moments later he was able to rejoin the group, but he was dropped again for good some 2 km from the top of the climb.

Heading into Tuesday’s stage 4, Taaramäe enjoys a 25-second GC lead over Elissonde, with Roglič in third, 30 seconds down. 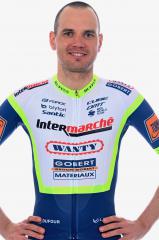 Rein Taaramäe wins stage 3 of the Vuelta a España.