The 100th anniversary of the UCI Road World Championships got properly underway on Sunday, crowning its first champion at the end of a 43.3 km ITT from Knokke-Heist on the coast to the historic city of Bruges. Long and pancake-flat, this was a time trial that suited out-and-out specialists.

Second starter Matteo Sobrero (Italy) was the first of 55 riders to finish having overtaken his minute man, setting an early benchmark of 50:53. A short while later, Dan Bigham (Great Britain), Max Walscheid (Germany) and Stefan Bissegger (Switzerland) set new best times in quick succession, but Remco Evenepoel (Belgium) went quicker still before the Swiss rider had a chance to take the hot seat.

Evenepoel’s lead held strong until the last four riders were on course, Kasper Asgreen (Denmark), Stefan Küng (Switzerland), Filippo Ganna (Italy) and Wout van Aert (Belgium) all going faster at the first time check (at 13.5 km). Van Aert was on top by seven seconds to Ganna, and newly crowned European champion Küng had some work do with a 17 second deficit to the Belgian.

By the second time check, there was less than a second between Van Aert and Ganna, and Evenepoel was back on the provisional podium with Küng and Asgreen dropping away. The support for the Belgian was incredible as he rode the last 10 km, but he could not hold off the defending champion in the end.

Ganna went from seven seconds down at the first time check to victory by six seconds at the finish, demonstrating a perfectly paced time trial effort. Home favourite Van Aert had to settle for a hard-fought second – adding to his pair of silvers in the ITT and road race at the 2020 worlds, and a medal of the same colour at the Tokyo Olympics – and Evenepoel joined them on the podium with third. 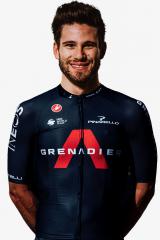