Julian Alaphilippe (France) on his way to victory in the 2021 World Championship road race.

The fans were out in force to watch the Frenchman ride to a second consecutive World Championship victory in Leuven, Belgium. Julian Alaphilippe (France) soloed to a spectacular victory in the 2021 World Championship road race at the end of a blisteringly fast and utterly thrilling day in Belgium.

The men’s World Championship road race covered 268.3 km from Antwerp to Leuven. The complicated course included a couple of urban circuits – including several laps of the Leuven finale – and featured a mix of wide highways, narrow winding roads, cobbled sectors and no less than 42 climbs.

A breakaway of eight got away inside the first 15 km but their gap never got much over five minutes. Then barely 80 km into the race, attacks began in the peloton with France showing first signs of their plan to ride an offensive race. Remco Evenepoel (Belgium) was on marking duties, so when Benoît Cosnefroy (France) jumped out of the peloton with Magnus Cort (Denmark), the 21-year-old glued himself to the wheel.

After 100 km, a group of 15 sat between the early breakaway and the peloton, including Evenepoel and Tim Declercq (Belgium), Cort and Asgreen (Denmark), Cosnefroy and Arnaud Démare (France), Jan Tratnik and Primož Roglič (Slovenia). Italy was the biggest team to have missed out, and while Evenepoel contributed to the fierce pace up ahead – perhaps to his elder teammate’s frustration – the maglia azzurri led the chase.

The breakaway and attackers were all brought back at around the halfway point, but splits in the peloton meant that there was no chance for a breather.  The attacks never stopped, and the next to get a convincing gap was Nils Politt (Germany), drawing out ten riders with 90 km to go. Evenepoel was there once again, as were Dylan Van Baarle (Netherlands), Rasmus Tiller (Norway), Neilson Powless (USA) and Andrea Bagioli (Italy).

The decisive move of the race came with 58 km to go when Alaphilippe accelerated on the cobbled climb, and Wout van Aert (Belgium) was careful to grab onto his wheel. The defending world champion’s move proved the last chance to book a ticket to the finish, and by 40 km to go, the peloton had given up the chase. 17 riders were left to race for the rainbow jersey.

The French pairing of Alaphilippe and Valentin Madouas kept the attacks firing in the last two laps, Alaphilippe taking every chance to drop his rivals on the climbs. After relentless accelerations, the Frenchman finally stretched out a small advantage, entering the final lap with 12 seconds over a four-man chase group of Powless, Van Baarle, Michael Valgren (Denmark) and Leuven native Jasper Stuyven (Belgium). Further behind, the third group on the road would not work together, Van Aert and Mathieu van der Poel among them.

Despite a strong quartet working together behind him, Alaphilippe’s advantage only grew as he approached the finish. In the end, he had time in hand to enjoy an emotional victory, and a successful title defence. A photo finish 32 seconds later saw Van Baarle take silver and Michael Valgren bronze, Stuyven and Belgium missing out on the podium by an agonisingly small margin. 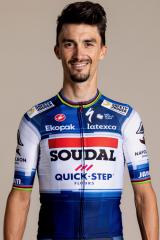 Julian Alaphilippe (France) on his way to victory in the 2021 World Championship road race.