Van Vleuten won the red jersey with a one minute 34 advantage on Marlen Reusser. A final short and steep climb with 300 meters to go launched Lotte Kopecky (Liv Racing) to a stage victory on the fourth and final stage of the Ceratizit Challenge by La Vuelta. Elisa Longo Borghini (Trek-Segafredo) followed Kopecky across the line to take second with Anna Henderson (Jumbo-Visma) taking third.

Annemiek van Vleuten (Movistar) became the new Ceratizit Challenge by La Vuelta champion after she rode into the finish comfortably within the peloton.

The day started with a selection of 13 riders riding off the front of the race. With such a large break, the riders in front struggled to get enough of a gap from the peloton. Eventually, a selection of four with Anna van der Breggen (SD Worx) broke away.

Valcar-Travel & Service, working for the 2020 final stage winner Elisa Balsamo, kept the strong breakaway within catching distance. The four were never allowed over a minute and a half advantage.

With the breakaway’s advantage over the peloton dropping to 23 seconds, Leah Thomas (Movistar) attacked with 10 km to go. Van der Breggen, Alena Amiakiusik (Canyon-SRAM), and Shirin van Anrooij (Trek-Segafredo) kept their pace up but were caught by the chasing peloton with 3.6 km to go. Thomas continued 17 seconds ahead of the peloton with 2 km to go.

In the end, Thomas couldn’t compete against Kopecky and Longo Borghini on the final run into the finish. Kopecky crossed the line victorious after coming back from a nasty crash on the trakc at the Olympic Games. 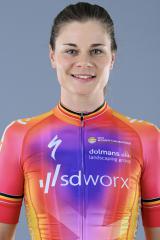