For the next year, Van Dijk will wear the rainbow jersey in time trials and the European champion jersey in road races. Ellen van Dijk (Netherlands) couldn’t hold back her tears when she realized she had won the 2021 World Championship time trial. Van Dijk had a long wait in the hot seat before she could celebrate, with the Olympic time trial gold medalist Annemeik van Vleuten (Netherlands) and European time trial champion Marlen Reusser (Switzerland) the last riders two to finish.

Reusser secured second on the day, ten seconds behind Van Dijk, with Van Vleuten rounding out the podium in third a further 14 seconds behind.

“I didn’t know I would become so emotional but this has been a dream for so long, to get that world title again,” Van Dijk said. “This year everything felt so good but then there was always this Marlen Reusser who was so strong, and I knew I had a really good level but I also knew she is super super strong. The last couple of weeks she beat me in every single time trial so I knew it would become super super difficult and I would have to ride the best ever time trial. I think it was good but I had no idea if it was good enough because I started one hour ahead of the favourites.”

Van Dijk set a blistering time of 36:05 early in the race, nearly two minutes faster than fellow Dutchwoman Riejanne Markus who had been in the hot seat for some time. Van Dijk had to wait nearly an hour for her two biggest rivals to finish, and at the first time check, Reusser looked to be setting a quicker time.

The second half of the course proved to be too much for Reusser who lost crucial seconds towards the finish. Van Dijk was able to win her second-ever world time trial champion title, her first was in 2013.

“I can’t quite believe it yet, it’s been a dream for so long,” Van Dijk said.

American Amber Neben finished in fourth, one minute and 24 seconds behind Van Dijk, but for someone a little over a month out from a broken pelvis it was a strong performance. 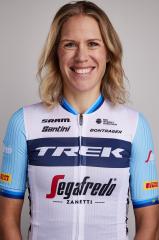