Elisa Balsamo was almost invisible until the last few-hundred metres, beating Marianne Vos in the sprint to take the rainbow jersey in style. Elisa Balsamo took a phenomenal victory in the World Championships road race, taking the elite rainbow jersey back to Italy for the first time in ten years. It’s her second road world title after winning the junior race in 2016.

A few riders tried to get away early in the 157.7 km race from Antwerp to Leuven, but most of the action was out the back until the last 60 km. The accelerations began in earnest on the Smeysburg just inside 50 km to go when Annemiek van Vleuten (Netherlands) put the hammer down, successfully stretching out the peloton and raising the pressure.

Several kilometres of acceleration and stalling followed as one rider after another tested their rivals. Great Britain, Italy, Spain and of course the Netherlands were particularly active, trading blows on and between the climbs that littered the course.

Aude Biannic (France) put in a strong attack, carrying a small gap over the finish line at 31 km to go, but Mavi García (Spain) was the one to really cause problems for the rest of the field, stretching an advantage up to 30 seconds with a solo attack 24 km out.

The Netherlands team was in charge of the chase, Van Vleuten almost single-handedly bringing García back to within 10 seconds. The Spaniard held onto a slim advantage until the Keizersberg when the Van Vleuten-led group, now reinforced by a large number who had been caught behind a split, finally chased her down with 10 km left to race.

The bunch faced three remaining climbs before the finish, three more opportunities to attack and avoid a sprint, but no one could get away. Italy led the group onto the finishing straight, Marianne Vos (Netherlands) careful to follow as a gap opened up, but the 23-year-old Balsamo was strongest in the charge for the line. Marianne Vos was unable to come round the young Italian, settling for second ahead of Katarzyna Niewiadoma (Poland) who won the bronze medal on the other side of a one-second split. 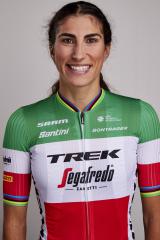