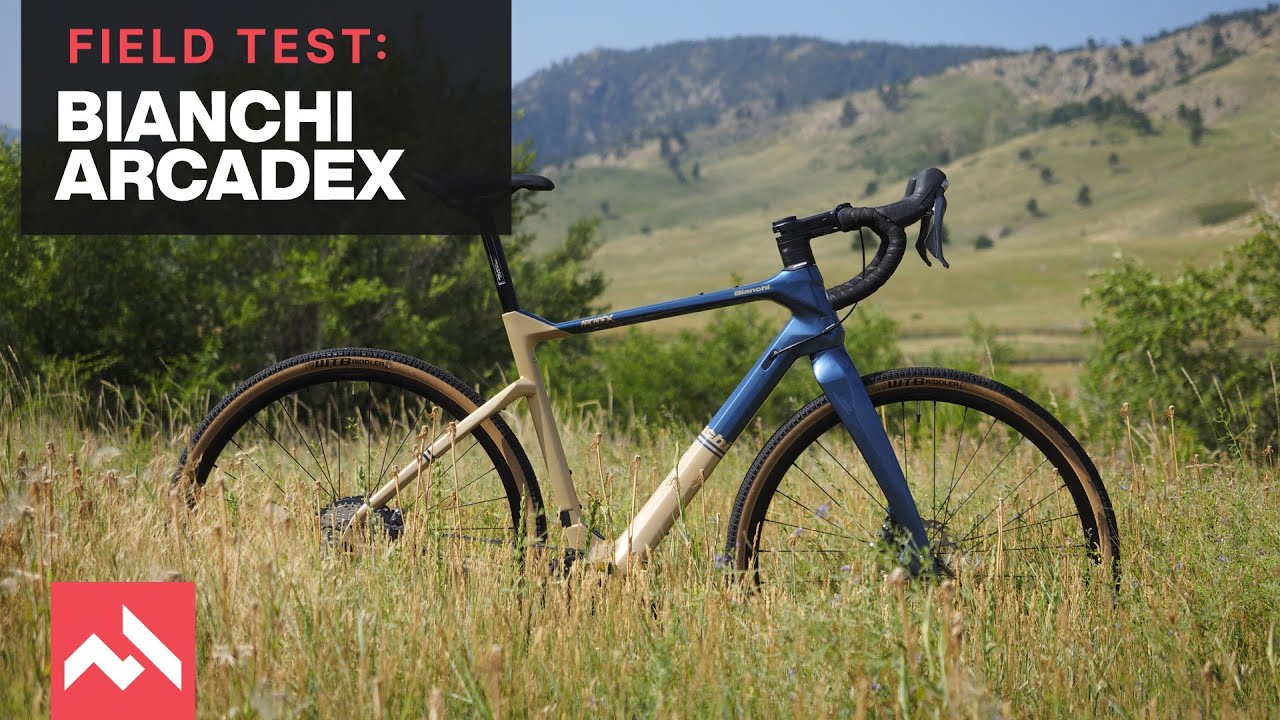 Super efficient under power, but a brutally stiff ride, odd geometry and aesthetics, and some odd routing and spec choices.

It’s a strange beast, the Bianchi Arcadex. It is perhaps the stiffest gravel bike I’ve ever ridden.

It has design cues straight off the most hard-edged aero road frames. Bianchi uses the word “sculpted” to describe its various shapes and edges and references “high-speed bikepacking” as a potential use case. It looks like it wants to be aggressive and it rides like it wants to go fast, but the fit is incredibly short, with front-center figures two to three centimeters shorter than equivalent bikes from other brands, so the overall effect is that of an angular supercar that’s just been run headfirst into a wall.

I do not love the Bianchi Arcadex. You can probably tell. Which is a bit sad for me, personally, as Bianchi has historically made a number of my Top Ten Best Bikes — the Specialissima remains almost untouchably good, and the gravel-lite Impulso doesn’t leave much to complain about. But with this one, the mark was missed.

Our test bike was built with a Shimano GRX 600 mechanical groupset, set up with a single 40-tooth front chainring and an 11-42T cassette. That’s an adequate range for most gravel adventures but certainly narrower than true mullet setups or almost anything with a double.

The Alex Rims GD24 tubeless-ready wheels are perfectly capable and would complement almost any gravel bike in this price range. The 21 mm internal rim width keeps WTB’s 37 mm-wide Riddler tires right at that printed width. Twenty-four spokes front and rear and aluminum rims add a hint of vertical flex and comfort that is otherwise missing from the Arcadex package, and for that I salute Bianchi’s wheel spec choice, even if it’s not particularly fashionable. Don’t plan on going much wider, though; tire clearance is capped at 700×42 mm or 650×47 mm.

FSA’s semi-integrated bar/stem situation leaves something to be desired, mostly because it pulls the hydraulic lines underneath the stem and runs them down through the head tube. At the very least (like when we tried to lower the stem just 5 mm), the system is incredibly fiddly, and at worst (like when we tried to drop the stem 15 mm), the brake lines should ideally be cut and re-bled. In fairness, that’s pretty common on bikes with fully internal routing these days, but that doesn’t necessarily make it better.

The bar and stem themselves are fine. They’re made by FSA and badged with Bianchi’s Reparto Corse branding. I like the shallow drop for a gravel bike and the bend is nice on the hands. I’m glad Bianchi avoided the temptation to run a one-piece bar/stem.

The choice of a 31.6 mm-diameter round aluminum seatpost definitely leaves some available comfort on the table. A smaller 27.2 mm-diameter post would have added a bit of flex and probably would have helped tone down the hyper-stiff back end.

The Arcadex will take three water bottles, two inside the main triangle and one on the underside of the down tube. Fender mounts front and rear are a good touch, and I’m glad Bianchi made it possible to add a front derailleur. I like 1x gravel drivetrains, but for this bike’s personality, a double may be a better match. It’s good to have that option. A top-tube feed bag mount is a nice touch as well.

The PF30 press-fit bottom bracket shell is not my first choice in BB style. The combination of large-diameter bearing cartridges, a stiff oversized axle, and narrow bearing spacing is more prone to creaking than other options where the bearings are set further apart. But in fairness to Bianchi, we had no issues with creaking in our (admittedly relatively short) test period.

Does this build match the price tag? Sort of. Bianchi got the key components right, and GRX 600 mechanical is often found in this range. A few more carbon bits would have been appreciated, but overall, the spec is decent relative to most competitors. The exceptions, as always, come from direct-to-consumer brands like Canyon. You can find a Grizl with a similar build for about one-third less.

Bianchi got the steering geometry right. A 71º head angle (70.5 for the XS and S sizes) and 50 mm fork offset result in a trail figure of 67 mm, providing the sort of stable, predictable handling we often look for in a good gravel bike.

A few numbers on the Arcadex geometry chart stand out, though. The first is front-center, as mentioned above. Front-center is the distance from the center of the bottom bracket to the center of the front hub. On our 54 cm test sample, that figure is 602 mm. That’s almost 2 cm shorter than the new Specialized Diverge. The reach figure is short, too, at 383 mm for our test bike compared to 403 mm on the same size Trek Checkpoint or 402 mm on a Canyon Grizl. Both these numbers point to the same thing: the Arcadex is a short bike.

That runs counter to what’s going on elsewhere in the gravel world, where brands are beginning to borrow from the long frame/short stem mindset that has overtaken mountain bikes in recent years, which lends far better control on bad surfaces. Bikes like the BMC URS have taken that concept quite far, and I wouldn’t necessarily advocate for that sort of geometry for all riders, but the Arcadex is way at the short frame/long stem end of the spectrum. That’s not really where you want to be.

The overall wheelbase is quite short, too, which isn’t the worst thing. It makes for slightly sharper cornering and makes it easier to flick the back end of the bike around when things get loose. But it’s definitely a bit less stable than longer, lower options (like the aforementioned Diverge and URS). It feels more like a road bike, which isn’t necessarily a bad thing if you’re talking about road bikes. Except that we’re not.

This can be summed up in a single word: stiff.

Huge carbon tubes, an aluminum bar, a fat 31.6 mm seat post, 1.5” headset; all of it points toward a ride quality that is anything but forgiving.

But that stiffness isn’t the sort that encourages you to push into it because it doesn’t give much back. The best bikes have a bit of spring in their step: you push into them and they bounce back at you like a tennis ball. The Arcadex is more like a bowling ball. It’s rock solid. Wail on it all you want, it’s not going anywhere.

The feel is similar to some aero road bikes, particularly those that attempt to overcome the lateral flex of narrow tubes by using thick tube walls and massive bottom bracket sections. The old Felt AR comes to mind as a reasonable comparison, though unfortunately not in a good way.

What does the Arcadex want to be?

This question is the most difficult to answer, and that’s not generally a good sign. It’s a gravel bike with aerodynamic cues, including dropped seatstays and those wide fork legs. It’s massively stiff. It has a short fit, moderate tire clearance, and lots of funky tube shapes. What does it want to be?

I think it wants to be a gravel race bike. But the short fit doesn’t really match up with that desire.

That said, part of reviewing bikes is considering that other riders may experience something different on the same bike. I think that is absolutely the case with the Arcadex. I’m 68 kg (150 lb) and pretty lanky. I run long, low positions, even on gravel bikes. As a result, I found the Arcadex to be both too short and too stiff.

Riders packing more weight and more power will almost certainly feel differently about the massive tube cross-sections and stiff ride. And riders looking for more upright positions won’t mind that the front end is a couple centimeters closer than other gravel options.

It feels more like a road bike, and as long as you’re just rolling on mellow dirt roads, it’s fine. But in this highly competitive market, fine doesn’t cut it.

More information can be found at www.bianchi.com.