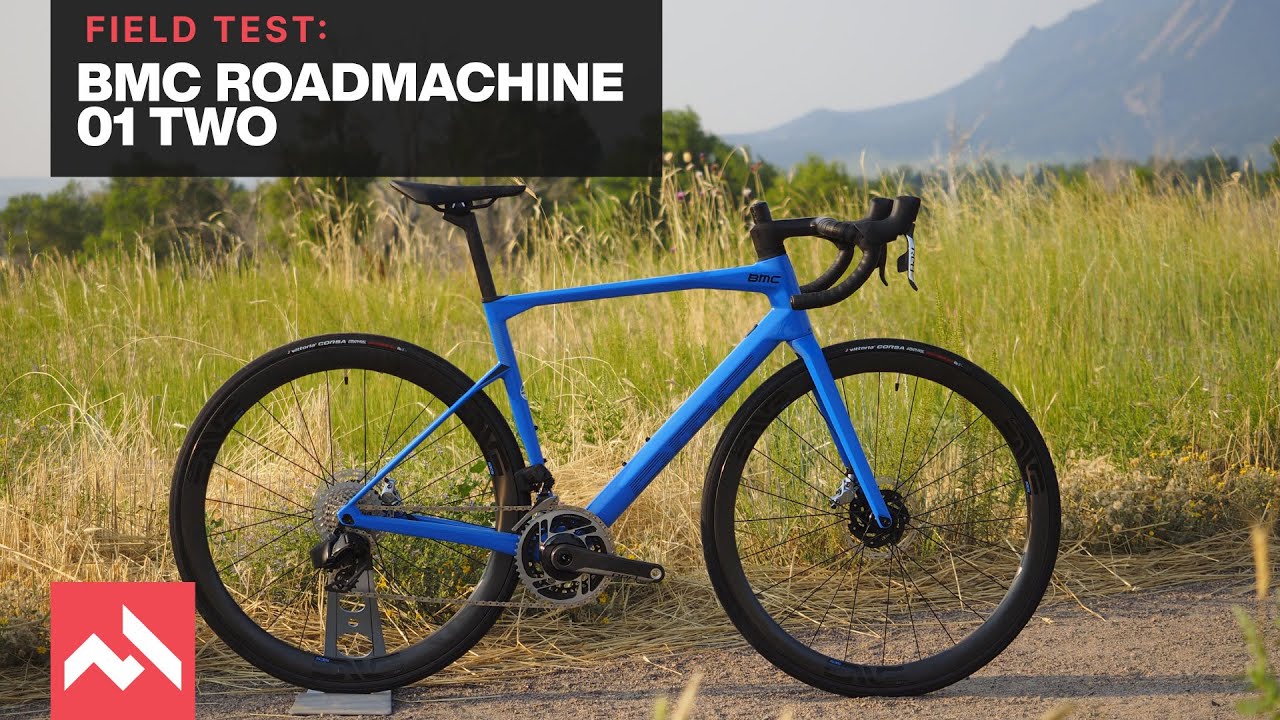 The endurance category has changed so dramatically over the years that endurance bikes are hardly recognizable as such. The Roadmachine looks and feels like a race bike.

Gorgeous and distinctive integrated design, a lovely ride, and a top-shelf build kit. Just try not to choke when you see the price tag.

The endurance category has changed so dramatically over the years that endurance bikes are hardly recognizable as such. The Roadmachine looks and feels like a race bike.

I recently bought a pretty darn nice motorcycle (2015 Triumph Tiger 800 XCx) for US$7,500. There’s no cup holder, but it has heated grips. It makes me happy.

The Roadmachine 01 Two from BMC costs US$12,300 / AU$14,800 / £11,400 / €12,000. It’s also pretty darn nice, and coincidentally, the same color as my motorcycle. But I couldn’t stop myself from wondering what makes this bicycle — or any bicycle, for that matter — worth more than a farkled-out motorcycle. I’ve been a defender of high prices on premium bicycles we’re likely to see under pros at the top ranks of the sport, but this feels a bit absurd.

That’s not exclusive to BMC, of course, but it factors into how I assess the Roadmachine and any other bicycle that mirrors or exceeds its price tag. What I can tell you is that BMC has created an exceptional ride that makes a good case for a high price. How high? That depends on how thick your wallet is, and what your goals are.

The Roadmachine 01 Two is “rooted in endurance,” according to BMC. It feels like the endurance moniker has slowly receded from bike marketing lexicon because it has, in the past, indicated a laid-back, heavy, and sluggish ride. Endurance has evolved drastically since then, morphing into the all-around category with an ease that must have bike designers slapping their foreheads and wishing they had made these design moves earlier.

Such is the case with the Roadmachine 01 Two. To look at it, you’d think you’re seeing an aggressive race machine. And it is indeed that. But with clearance for 33 mm-wide tires, it’s also a multi-surface bicycle, an all-day grinder, and really, whatever else you want it to be. Perhaps not so much a grocery-getter, unless you’re really bold or own some impressive bicycle locks.

But since these endurance elements have now meshed so seamlessly with the all-around category, such riders must also take on some of the high-zoot, performance-focused elements that perhaps don’t offer as much benefit to the everyday rider. Internal cable routing, for example, is great for the pro looking to minimize drag, but it becomes a hassle for home mechanics. As compromises get eliminated from the overall package, other compromises always sneak up on us.

Going along with the stealth cable routing is BMC’s Integrated Cockpit System, or ICS. The ICS hides cables and housing completely and looks pretty darn sleek. Just be sure to consider your handlebar specs before you buy this bike, since there’s no adjustability other than stem spacers.

The system looks pretty cool but I wonder if it’s necessary on a bike like this. A two-piece stem and handlebar allows you to tailor your riding position, albeit at the expense of weight and aerodynamics. It really boils down to what you intend to do with this bike. If you’re a road racer who occasionally hits gravel, this probably matters less to you because you’re apt to find the cockpit that works for you and leave it at that. If you’re a position-tinkerer or aren’t sure what position is best for you, the ICS presents some challenges.

That said, the ICS is a pretty comfortable cockpit as far as these integrations go. The bar flats are rounded right where the palms of my hands rest, and they’re bent inward slightly for ergonomics. The drops feel just right, especially for a guy like me who likes to play Mark Cavendish at county lines.

The Tuned Compliance Concept (TCC) Endurance is what BMC calls its holistic approach to comfort without sacrificing aggressiveness and rideability. BMC says it is the first company to bring dropped seatstays to the world of road bikes. This allows the seatpost to flex fore and aft more than a conventional frame design, lending some comfort and compliance to the rider over smaller chatter and even larger, square-edge hits.

The D-shaped seatpost also helps that fore-aft movement while providing some aerodynamic benefits. These are two features of the TCC Endurance concept, and the overall package is intended to allow riders to face rough roads and gravel without the bone-chattering that can suck the energy right out of you.

All of that rides atop Enve SES 3.4 AR Disc wheels. These carbon hoops feature a wide stance — a whopping 25 mm inner rim width — and a slightly deeper rim profile in the rear wheel than the front. I’ve ridden these wheels extensively on several bikes and count them among the best multi-surface wheels you can buy, but you pay handsomely for the privilege.

My test bike came with SRAM’s Red eTap AXS groupset. It’s a perfect addition to this top-of-the-line bike for its gearing versatility and simple shifting layout (one button on each side makes for easier shifting when you hit consistent rough chatter like gravel roads). The hood ergonomics may not be right for all riders, but I like the hoods particularly for gravel roads when a solid purchase on the hoods becomes far more important.

One thing noticeably (and annoyingly) absent from my test bike was an integrated computer mount. Most riders don’t leave home without a computer, so it seems like brands should always include such a piece, especially as cockpits become more integrated and complex. It’s a minor but important touch that far too many manufacturers overlook.

The size 54 cm test bike I rode features a 997 mm-long wheelbase. That’s short enough to indicate this should be a lithe ride I’ll be able to change lines quickly with. That is, however, coupled with a relatively large trail figure — 63 mm, to be precise — that’s probably better suited for the intended use. This indicates a much more planted feel, usually at the expense of steering quickness. By comparison, the Specialized S-Works Tarmac has a 58 mm trail figure in the same size. Interestingly, however, BMC’s top-end racer, the Teammachine SLR 01, also features a 63 mm trail figure in size 54 cm. So the geometry choices here seem backed into BMC’s overall race strategy.

The combination of those figures is interesting: It shows how far endurance bikes have come to meld with more aggressive all-around bikes. Steering stability, in other words, doesn’t necessarily have to come at the expense of a fun, lithe ride feel.

How did it feel on the road — and in the dirt?

It took some getting used to, but by the halfway point of my ride, I found myself frequently riding with my hands off the bars, simply because it was fun to feel how locked-in the steering felt. This would probably irk me if I was lining up for a crit or an aggressive, fast group ride, but for long miles in multi-surface conditions, the locked-in steering feel only complements the Roadmachine’s capabilities.

I have ridden TCC-equipped bikes before, and the overarching package usually leads to a compliant ride that doesn’t overdo it with the bouncy feel. The TCC Endurance, however, takes things a bit further, and at high cadence pedaling, I found myself bouncing more than I’d like on the saddle. I think this was likely a conscious decision by BMC, since the Roadmachine is billed as a multi-surface-capable bike. On dirt, the compliance felt just right, in fact.

Just be honest about what conditions you’re most likely to spend the majority of your time riding. If you’re mostly on pavement, you might find the compliance to be a bit of overkill. But if you regularly hit dirt roads, especially for extended periods of time, the Roadmachine feels great. I can see this being a great choice for a Belgian Waffle Ride-type race where you’re mostly on tarmac, but also hitting unpaved sections, too.

OK, so we know it’s comfortable. Is it fast?

Those two concepts aren’t entirely unrelated, of course. The more comfortable you are, the faster you’ll be in the long run. So the answer is, of course, it depends. Purely on pavement, the Roadmachine felt a bit too locked-in and endurance-oriented for my preferences; that would pose a problem for pure-pavement racing, especially in tight packs.

Notably, however, I didn’t feel like I had to fight the front end on high-speed descents, though of course with a big trail figure, the Roadmachine will never feel as scalpel-accurate in tight switchbacks as its Teammachine brethren. Then again, it’s not meant to be.

The Roadmachine feels like it gives up a bit of pure race design for the sake of versatility. And that suits a broad swath of riders perfectly. Yet when we talk about the word “compromise,” it often comes out as a pejorative. When it comes to the Roadmachine, the compromise works. That’s exactly what a multi-surface bike like this needs to accomplish.

And while this perhaps only feeds the ego, the Roadmachine looks really cool. The BMC silhouette is unmistakeable, with the dropped seatstays and the notable angle dropping from the top tube to the head tube. The top tube slopes from head tube to seat tube, but the bike in no way resembles the ugly, sloped lines of endurance bikes past. The Roadmachine has a mean, snarling look, as though it’s ready to chomp bitumen and pea gravel in equal measure.

So the answer is yes, the Roadmachine is plenty fast. The Swiss wouldn’t let this one leave the factory if it wasn’t.

Is it worth the money?

Look, I drive a 20-year-old truck and I’m paying a mortgage on a writer’s salary. And my daughter’s college fund ain’t gonna fill itself. I loved riding the Roadmachine, but it’s not likely to end up in my stable of bikes. For the high-end consumer looking for that perfect Belgian Waffle Ride bike, the Roadmachine may very well be it.

BMC has created a wonderful bike that does exactly what it sets out to do: Become the perfect tool for multi-surface riding and racing. If you’re shopping in this price range, you absolutely won’t be disappointed with any aspect of the Roadmachine’s ride quality, build, and aesthetics.

The bottom line is, you can certainly find a bike that does all the things the Roadmachine 01 Two does for less than half the price, but not with anywhere near the same level of refinement. That’s what you get for the big price tag: endless tweaks, R&D, aerodynamics, comfort, all rolled into a halo package.

It’s a wonderful bike that’s a lot of fun. Just be honest with yourself about how much true multi-surface riding you’ll be doing, and what your overall budget for supreme comfort and ride quality is.

More information can be found at www.bmc-switzerland.com.