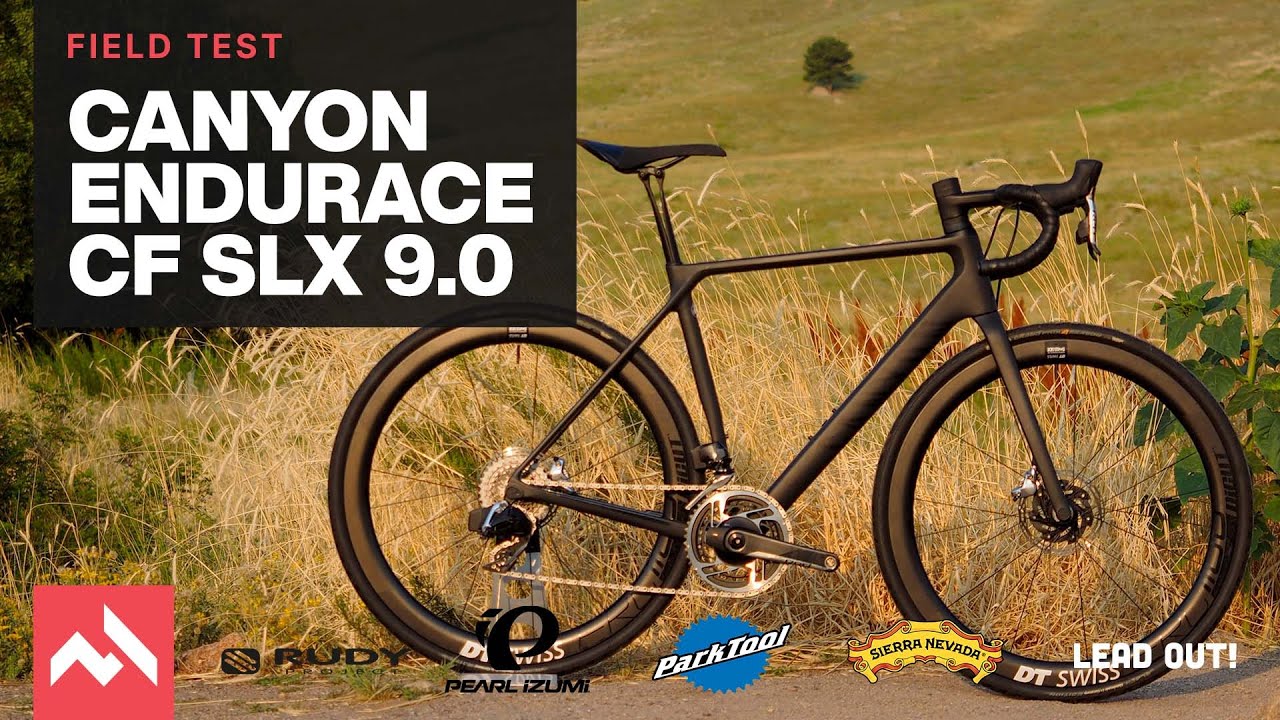 Manufacturers have gone to great lengths in recent years to incorporate compliance into top-of-the-line race and performance bikes. Elastomers, shocks, pivoting seatposts, dropped seat stays, and many more developments all seek to keep the rider comfortable longer, thereby giving you the best shot at peak performance. Canyon’s Endurace CF SLX 9 Disc eTap has plumbed the depths of that same mission, but instead of resorting to doodads and thingamajigs, Canyon’s compliance relies mostly on big ol’ tires.

I find that simplicity appealing for several reasons. First, most riders are only going to buy one bike, so it truly should be able to do it all: race, all-day grind, multi-surface mash. The Canyon’s 700×30 mm official maximum tire clearance doesn’t sound all that impressive, but keep in mind that figure is laughably conservative. In fact, although the stock tire spec is 30 mm Schwalbe Pro Ones, Canyon supplied our test bike with 32 mm (printed width) Continental Grand Prix 4 Season clinchers, which measured closer to 34 mm on the stock 19 mm-wide DT Swiss wheels — with room to spare. That extra volume won’t turn the Endurace into a proper gravel bike, but it still allows it to be a multi-surface tool, at least in the dry. And on the flip side, if you want to toe the line at the local road race, the Endurace is more than capable of being the right tool for that job.

It’s imperative to mention that the Endurace delivers a lot of these high-end promises at a price that comes in about 25-35% lower (depending on region) than many of its most direct competitors that don’t operate on a direct-to-consumer basis. It’s still an awful lot of money, but comparatively speaking, you can certainly call it a good value.

On paper, it looks really, really good. But you don’t ride on paper. Canyon’s lower price tag only becomes exciting if it can compete with the big boys in the category. Fortunately, that’s not at all a problem for the Endurace.

The Endurace comes equipped with a high-zoot build. It starts with the SRAM Red eTap AXS drivetrain, which includes a power meter. That’s notable, as many bikes out there at this price or higher don’t come stock with one. The drivetrain gearing is unusual for traditionalists, but SRAM’s 10-33T cassette, combined with the 48/35T chainrings, offers a very wide gear range without tacking on too much weight.

Compliance lives mostly in the VCLS seatpost, as well as a seat clamp that’s positioned lower than normal to allow more flex in the seatpost overall. To further enhance such flex, Canyon incorporates what they call a Comfort Kink into the seat tube. This is basically a taper in the tube as it reaches the bottom bracket shell, which allows more fore and aft flex.

Up front is Canyon’s H11 integrated handlebar and stem, which has backswept top as compared to the straight section found on the Aeroad cockpit, and also supposedly a bit more compliance, too. Unlike a lot of other high-end bikes, the brake hoses (and derailleur wires and housings, depending on the build) are run externally, at least up front. My test bike did not come with an integrated computer mount, but there were mounting holes underneath the stem where one could be attached.

Unlike endurance bikes of yore, the Endurace keeps some pretty tight geometry. A 990 mm wheelbase combines with a racy 73-degree head tube angle, which indicates this bike is made for aggressive riding, quick cornering, and lithe line changes.

By all outward appearances, the Endurace could hardly be called an endurance bike at all. It looks and feels pure race. But the comfort kink and the VCLS seatpost, along with the big ol’ tires run at a lower pressure, make this speedy bike more than comfortable enough for all-day grinds on rough roads.

Zoom zoom! The Endurace CF SLX has places to go, so hold on. It’s very, very stiff laterally underneath you from the very first pedal stroke, and everything about the handling screams race machine. Yet Canyon never strays too far from the needs of the endurance rider — namely, a stable front end that doesn’t wander, even with your hands off the bars.

I rode the Endurace down some high-speed descents with plenty of hairpin turns. The steering lags just the tiniest bit, but I expect that had more to do with the big tires and low pressure rather than the geometry. With some slightly narrower rubber — say, some 28 mm tires — the Endurace would cut a bit more sharply.

And yes, it is indeed a fairly comfortable bike, though I wouldn’t say it reaches the compliance levels of something like the BMC RoadMachine or Trek Domane. Instead, the Endurace CF SLX gives you just what you need and nothing more when it comes to flex under the saddle — from the specially designed VCLS seatpost — or even up front.

That H11 integrated handlebar and stem may very well be more comfortable than the one on the Aeroad as Canyon claims, but that’s not saying much. It’s still very stout and stable when leveraging the front of the bike during hard efforts, and it became something of a game for me to wrench on the handlebars as much as possible while sprinting and climbing, just to see if I could sense any sloppiness or flex. There’s just about none. Much of that planted feeling in the front end comes from the integrated cockpit.

I found that much of the front-end compliance came from tailoring the tire pressure. I like it that way — sometimes less is more — but whether that is a pro or a con in your book will depend on your perspective. Nevertheless, the total package is still a pretty smooth and balanced ride, if a bit disjointed at times.

Of course, keep in mind that such integration cuts down on adjustability drastically. On an endurance bike, I’d rather have the adjustability. I wonder if the frame and fork, along with the down tube, would provide enough of that lateral stiffness without the one-piece bar and stem combo. My guess is the difference would be negligible enough that I wouldn’t miss anything. Give me a two-piece cockpit any day.

Here’s where I could have used a bit more of that magical compliance everyone’s always talking about. The seatpost does an admirable job of quieting high-frequency chatter, but the noticeably stiff cockpit can transmit quite a lot of it straight to your body. Dropping the tire pressure only gets you so far when the road gets extra rugged — think a gravel road with water bars or brake ruts.

Of course, this hits — or even exceeds — the extreme end of the spectrum for what the Endurace CF SLX is intended to do well. The fact that it can handle such conditions at all at such a high level is a testament to the craft of this bike. That said, if you were going to spend all day on gravel roads with just a little bit of pavement, you’d want a gravel bike, or a road bike with more dramatic compliance built in.

Should this be your next bike?

There’s not much to complain about here. The Endurace sets out to become a jack-of-all-trades road bike and it accomplishes that in spades. On top of that, it does so in an obvious and straightforward fashion: tire pressure, and plenty of seatpost flex. There’s a lot to be said for simplicity.

The Endurace also wins on value. Again, it’s not exactly pocket change, but it rides at least as well than many endurance bikes that cost substantially more, while also offering a top-end spec that includes a dual-sided power meter.

So while the stealth paint job isn’t going to wow anyone in the group ride, the exceptional ride quality and race capabilities certainly may. The Endurace makes a great case for doing away with the separation between race bike and endurance bike altogether; it’s comfortable and fast, lithe yet stable. It could do with a bit more adjustability in the handlebar and stem to accommodate a wider swath of riders, but otherwise, it’s hard to find more than minor faults with the Endurace.