Bastianelli outsprinted Chloe Hosking and Clara Copponi to take the first stage of the Women's Tour.

The race stayed together for the majority of the opening kilometres with the first significant breakaway attempts only launching after the first intermediate sprint. Even then, breakaways struggled to get enough of an advantage before the race entered the final circuits.

The most significant classified climb of the day, Sibford Ferris, was enough to inspire a strong selection of five to try a move. Race favourite Amy Pieters along with her SD Worx teammate Demi Vollering were joined by Elise Chabbey (Canyon-SRAM), Juliette Labous (Team DSM), and Soraya Paladin (Liv Racing) in their attempts but their break was too much of a threat and the sprinter’s teams brought them back as the race closed in on the finish.

A crash in the final kilometre impacted teams vying for the win, including Canyon-SRAM’s Alice Barnes. In the end, it was a reduced bunch that sprinted for the win. 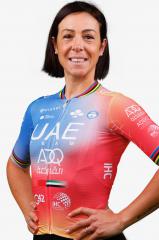