With adapted dropouts, a £950 chainring, and a healthy dose of optimisation, will Alex Dowsett power this Factor Hanzo to a new Hour Record? 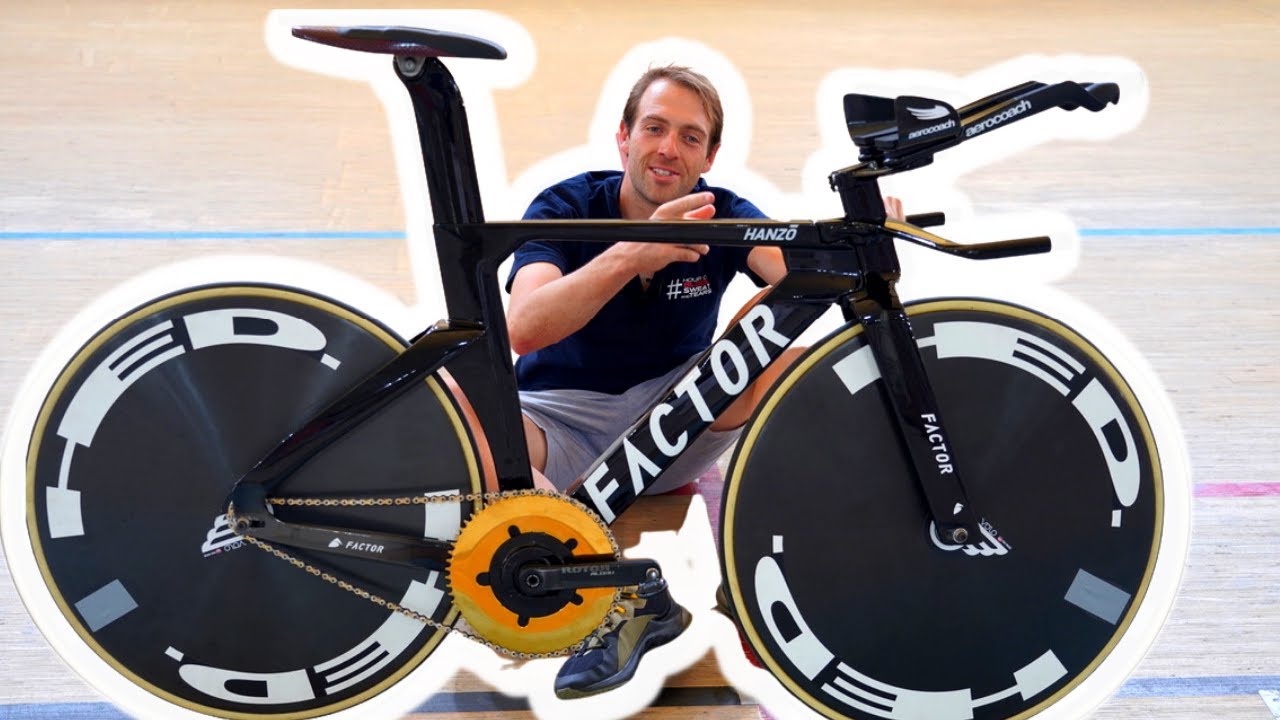 Alex Dowsett has unveiled the bike he will use for his upcoming UCI Hour record attempt. Dowsett, who held the record for 36 days in 2015, took to his Thighs Club YouTube channel to unveil his one-of-a-kind ultra-optimised Factor Hanzo track bike.

We say one-of-a-kind because not only is the Factor Hanzo still very much unreleased, but Factor seemingly had no intentions of making a track-going version of the new TT bike. In the video, Dowsett, who rides for the Factor-sponsored Israel Start-Up Nation team, explains some of the difficulties in adapting a frame designed for road hubs and axles to accommodate the narrower hubs and solid axles on a trackwheel.

While Dowsett and the team found a relatively simple solution for the front end, Factor turned to Silca and 3D printed titanium for the rear. The result is a part carbon, part titanium rear triangle Dowsett says is extremely stiff and, crucially, track wheel compatible. Presumably, the adapted bike also complies with the UCI rule stating all equipment must be commercially available.

Apart from these adaptions, Dowsett’s Hanzo frame and fork is seemingly otherwise identical to the forthcoming frame from Factor. Dowsett explained the new frame leans heavily on the recently relaxed UCI rules on frame design and features a head tube just 15mm wide and contrasting super-wide forks and seat stays.

Dowsett will tackle “the hour” on Hed Volo wheels and Vittoria Pista Oro 23mm tyres front and rear. Having arrived in Mexico last week, Dowsett tested both the Hed setup and Campagnolo Ghibli wheels “leftover” from his Hour Record ride in 2015. Ultimately the Hed wheels seemingly tested fastest on the Aguascalientes track at 1888m above sea level. On such an advanced bike, its nice to see what looks like good old duct tape to cover the valve openings.

Up front, Dowsett has opted for the Aerocoach Ascalon extensions with a 20° angle paired with Aerocoach elbow pads with a 15° angle. Dowsett explains the combination not only fits him well and is seemingly very aerodynamic but crucially keeps within the UCI regulations on the extension to elbow pad drop.

Aerocoach was also on hand with a maximum bling gold Aten chainring. While undoubtedly flash, Aerocoach claims the huge 61tooth chainring machined from titanium and reinforced with carbon fibre is significantly more aerodynamic than a standard chainring thanks to a lenticular outer profile, undulating chain ridge, and hidden bolts. The Aten chainrings are said to offer an advantage of up to 25cm per 250m lap compared to a “standard aero chainring”. 25cm might not sound like much but with Dowsett needing more than 220 laps in 60 minutes to break the record, all those 25cm could add up to a massive 55m. Costing a cool £950 per chainring that works out at about £17 per metre.

Sticking with the drivetrain, Dowsett has turned to Power2Max for a track-specific power meter with Rotor cranks, Speedplay Zero aero pedals, ceramic speed bearings throughout and an Izumi Super Toughness KAI chain.

Dowsett will spend the hour sitting on a Simmons Racing Pursuit saddle and has a Hammerhead mount and Karoo 2 head unit glued to the underside of the saddle. The Simmons saddle is presumably another customised item for Dowsett’s new Hanzo track bike given the Simmons website currently lists the saddle as only compatible with the Hope Tech HTF02 bike. Simmons offers these saddles with firm or soft “grippy” padding, or alternatively, no padding at all, with Dowsett opting for a padded version.

Dowsett will officially take on the Hour Record on Wednesday, November 3 and he plans to start around 4 pm local time (6 pm EDT / 11 pm CET / 9 am AEDT). The attempt will be streamed live on Dowsett’s YouTube channel,