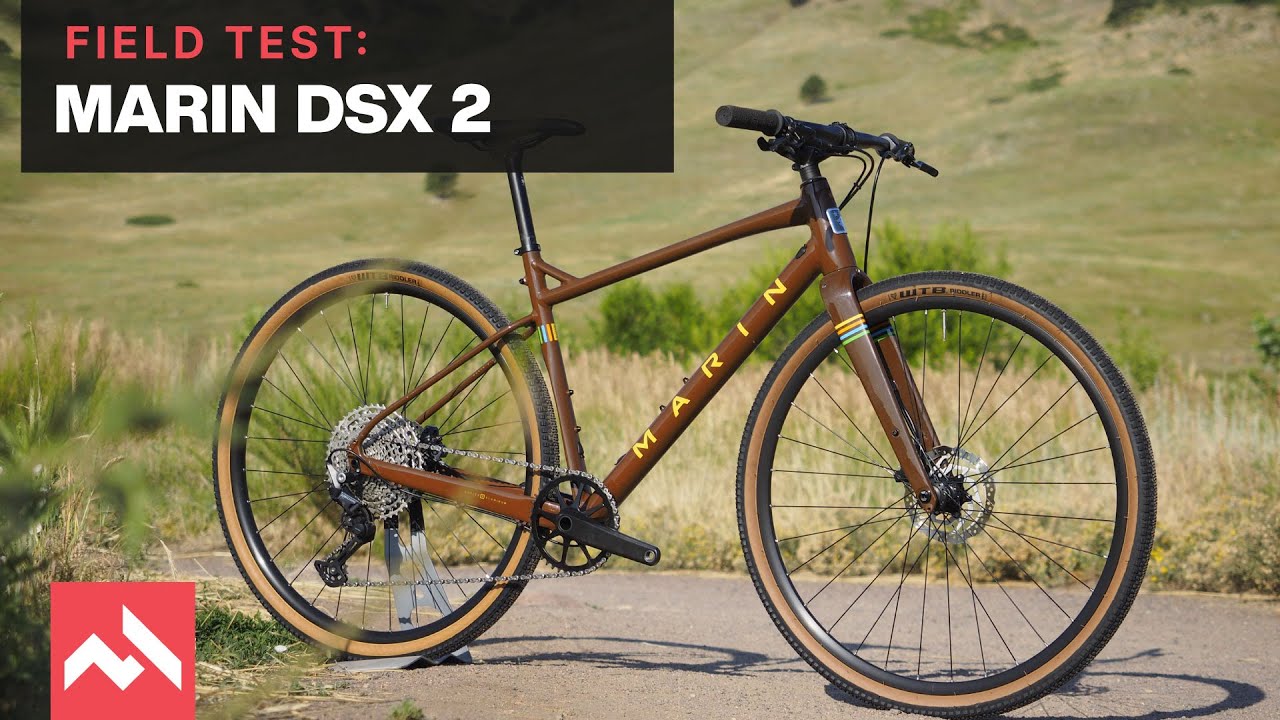 A fun and entertaining machine that won’t break the bank, but also a rough ride and a short reach.

A full commitment to flat-bar gravel

Whatever you think of flat-bar gravel bikes yourself, it’s becoming clear that the category is gaining in popularity, and for pretty good reason. Simply put — and as we’ve mentioned elsewhere — the additional leverage of a wider flat bar adds a healthy dose of fun to gravel bikes, making them easier to toss around and more controllable when conditions get dicey. Plus, many riders just prefer the more upright positioning and the casual attitude that comes with it.

While some brands have taken a halfhearted approach to the whole flat-bar gravel thing, Marin has decided to jump in headfirst, with three models built around two dedicated aluminum frames, both with longer reach dimensions than what the company uses for its drop-bar models.

The DSX 2 is the middle child in Marin’s flat-bar gravel lineup, based on the company’s Gestalt X collection of drop-bar gravel bikes. Like that Gestalt X, the DSX is made of TIG-welded 6061 aluminum and appears to use the same tubeset, sharing similar characteristics like the more radically sloping top tube and reinforced seat tube extension for more standover clearance, and the scalloped seat tube for more tire clearance.

Although the overall shape is similar between the Gestalt X and DSX, Marin has extended the reach on the DSX 2 by about 10-30 mm (depending on size) to correct for the change in handlebar style, and the chainstays have also grown from 415 to 425 mm to help maintain similar weight distribution. Fork rake remains the same at 50 mm — it appears to be the same tapered full-carbon fork, in fact — but because the head tube angle on the DSX 2 is 1.5° slacker, the trail dimension has grown to a substantially more stable 81 mm. Bottom bracket drop holds fast at 80 mm.

In addition to mellowing out the handling and accounting for the flat bar, the more stretched-out geometry provides the DSX 2 with genuinely superb tire clearance. The stock tires are just 700x45s, but Marin says the DSX 2 can handle proper mountain bike knobbies up to 29×2.1″.

Marin has outfitted the DSX 2 frameset with a healthy allotment of threaded fittings to boost the bike’s utility. There are front and rear fender mounts, dedicated rear rack mounts, and ports on the seat tube and down tube for an internally routed seatpost should you decide to add one.

Perhaps best of all is the kickstand plate welded to the underside of the chainstays. Why am I so excited about this, you ask? Because as much as Marin has clearly made the “Made for Fun” tagline part of its branding, it’s too easy to forget that plenty of people use bikes like this for getting around town, and not just for fun.

Parts-wise, it’s an interesting mix. The Shimano Deore single-chainring transmission with its 10-51T 12-speed cassette is straight off of a mountain bike, and it’s paired with a no-name aluminum 1x crankset and 42T chainring that appears to be made by Taiwanese OEM specialist Samox. Bottom bracket cups are fixed in a standard English threaded shell.

FSA supplies the integrated headset and the chain comes from KMC, but it’s otherwise a Marin house-brand affair in terms of the rest of the finishing kit.

Total weight for our medium sample comes out to 11.12 kg (24.52 lb) without pedals or accessories.

I’m not afraid to call this DSX 2 what it is: it’s basically an old mountain bike — with all the good and the bad that goes with that —  just in shiny new clothes and with a catchy new label. But that’s not the same as saying the DSX 2 is bad; in fact, it’s far from it.

Marin calls the DSX “a mountain biker’s gravel bike”, and that label largely holds true. With the extra leverage up front and the more upright positioning, it’s simply not that big a deal if you wash out a bit because you pushed the front end a little too hard in a corner, and with the shorter cockpit in general, there’s more room to shift your weight fore and aft depending on the situation.

In the hands of a skilled rider, that flat-bar format also makes it more fun to slide the bike around on purpose, and less likely that you’re going to go down if you get a little too frisky. In fact, were this my personal bike, I’d almost be inclined to run it with flat pedals to encourage more foot-out-flat-out riding.

Geometry-wise, the DSX 2 occupies a curious middle ground. Marin extended the reach and slackened the front end relative to its Gestalt X cousin, but it’s still not particularly long. As a result, the bike isn’t as locked-in and stable-feeling as a modern trail bike, but it’s also less nervous than the Gestalt X (though it’s worth noting the Gestalt X is one of the shorter gravel bikes around).

Combined with that flat bar and the shorter stem — and despite that generous trail dimension — the front end still ends up feeling a bit twitchier than I’d prefer. As frolicky as the DSX 2 often was, I kept finding myself wishing for more length to calm things down just a bit. And on longer rides, it sometimes just seemed a bit cramped.

“The DSX geo started as riding flat-bar Gestalt Xs, and adding more to it where we felt it was needed,” explained Marin director of product development Aaron Abrams. “The reach is ‘conservative’ because we see this as being the future of the Dual Sport category, and we feel the rider group for this bike is really wide and didn’t want to limit the bike’s group by making it too long and low, alienating some of the newer riders, or older demographics that our Dual Sport series caters to now.”

Remember that Marin actually has two distinct flat-bar frame geometries, and in fairness, some of these handling complaints would likely have been squelched with the DSX FS. That frame still uses similar tubing as the DSX 2 and the Gestalt X, but is built with front suspension in mind and more mountain bike-like geometry with 20 mm of additional reach, a smidgeon more bottom bracket drop, and an even-slacker head tube angle.

Abrams’ opinion about not wanting to alienate newer riders with a longer front end probably holds merit, but I’d still argue that that extra length is exactly what newer riders need since it’s so much more forgiving off-road, which is what we found on the Specialized Diverge Comp E5 Evo (that review is coming soon).

Ride quality leaves much to be desired regardless, with the stout carbon fork and heavily reinforced rear end yielding little when things get bumpy. The thick-walled aluminum seatpost and handlebar certainly don’t help in this regard, and knowing what we know about frame compliance and flex these days, that extra reinforcement on the front seat tube doesn’t exactly help. Unfortunately, there’s not much you can do to temper that with lower tire pressure, either (more on that in a bit).

Keep in mind that most of these gripes don’t stick out as much on smoother dirt. In other words, if your local stuff tends to be a little more buffed-out, everything I’ve said about the bike being fun still holds true, but the stuff about it being harsh-riding and a little skittish-handling can likely be ignored.

Off the dirt completely and back in town, the DSX 2 is also particularly well suited to urban duties, with that nimble personality and upright positioning lending itself to quick direction changes and excellent visibility — and I dare say that with fenders and a rear rack, this would be one heck of a commuter. In fact, that’s exactly how CyclingTips social media editor Mike Better spent a bunch of his time on the DSX 2 before and after our Field Test event, and he loved it in that role, especially in how it opened up more options for getting places.

For the most part, Marin made a lot of excellent decisions when it came to outfitting the DSX 2.

As mentioned earlier, Shimano features heavily on the build sheet, and while it’s not the flashiest or lightest stuff at this price point, it’s among the best in terms of long-term durability. The hubs are particularly weighty bits, but as any mechanic worth their salt can attest, the cup-and-cone bearings will last a lifetime provided they’re properly adjusted to start and overhauled as needed afterward. Likewise, the Deore 1×12 transmission is virtually flawless, with ultra-smooth and reliable shifts, quiet operation, and ample range for nearly any riding situation this bike is likely to see.

The brakes are more of a mixed bag with a disappointingly wooden feel at the levers and only so-so bite at the rotors. In fairness to Marin, however, this bike arrived to us used, so I can’t verify everything was properly bedded-in. Even so, swapping out the stock pads would likely do wonders.

Likewise, the 1x forged aluminum crankset seemed fine on paper, and stiff enough in practice, but the bearings spun as if they were lubed with gummy bears instead of grease. But again, this seemed more an issue with our particular secondhand sample instead of an inherent design flaw.

There weren’t many complaints with any of the Marin house-brand stuff, although the thick-walled seatpost and handlebar likely contributed further to the bike’s rather rough ride. Nevertheless, it’s all appropriate stuff for the price point, and the saddle was comfortable enough to get the job done.

Unfortunately, there was one crucial oversight that was impossible to ignore. Marin originally intended for the DSX 2 to be equipped with tubeless-compatible rims and tires, but COVID-fueled supply chain issues prompted a switch to non-tubeless stuff for both. This wouldn’t be a big deal for a road bike, but it’s a near-fatal flaw for a gravel bike that’s designed to stray into mountain bike territory.

At the very least, Marin perhaps could have gone with something like WTB’s 50 mm-wide Venture gravel tires instead, which would have provided more cushioning without overly sacrificing cornering traction.

“Made for Fun” still applies

Marin doesn’t seem to be taking itself too seriously these days. It’s a refreshing approach, and it’s reflected well in the DSX 2’s personality.

There are obviously things we’d change. We’d use that DSX FS geometry across the board, for example, and tubeless is a must-have. But even as-is, the DSX 2 is a fun machine to toss around, and an invigorating return to what most bikes should be.

Add in the attainable price point, and it’d be pretty easy to justify it as an N+1 machine. After all, who doesn’t need a little more fun in their life, no?

More information can be found at www.marinbikes.com.