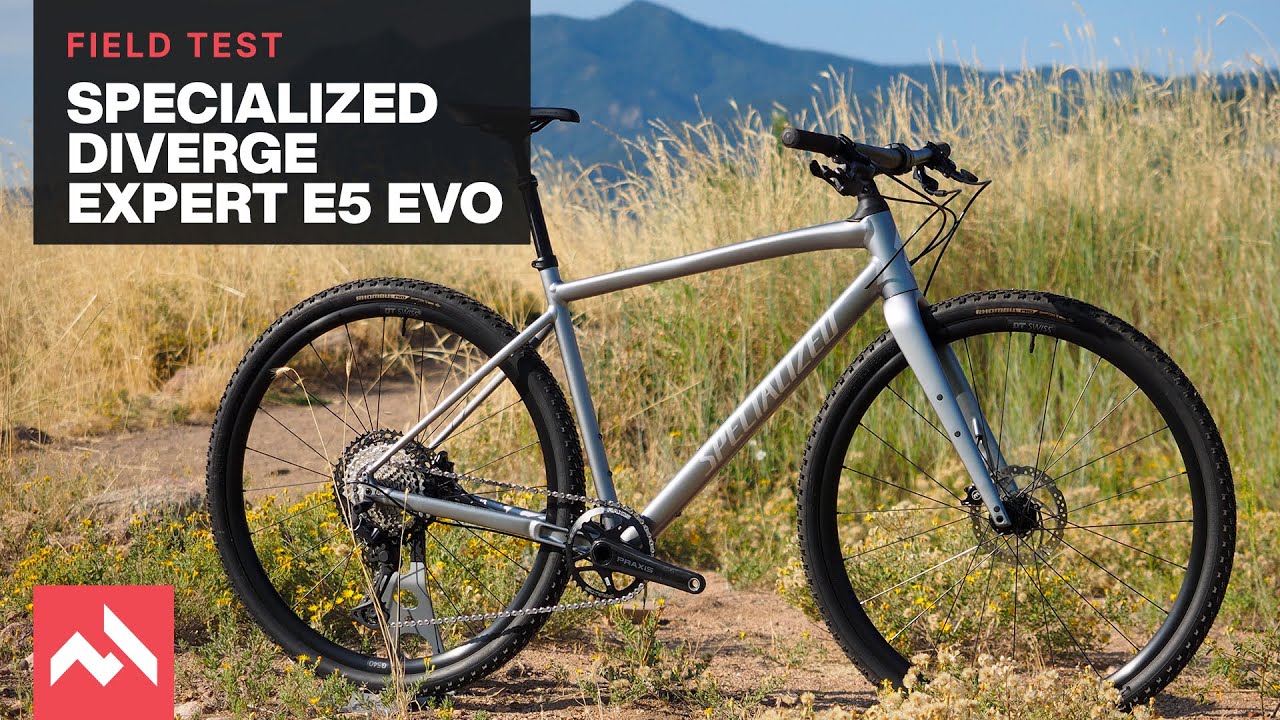 The flat bars are polarizing, but the dedicated geometry makes the most of it.

The Specialized Diverge E5 Evo is a gravel bike that doesn’t really want to be a gravel bike. It wants, quite desperately, to be a mountain bike. It has stretched, widened, flattened, leaned itself right on back, bending over backwards to be anything but what it is. Which is a gravel bike.

It’s a fun one, in the same way that mountain bikes are fun. It’s confidence inspiring and comfortable, and will be limited primarily by your skillset, not its own attributes. But it still exists in a strange crossover space between two different types of riding, which means it won’t work for most people. For some riders, though, it will be just about perfect.

The Diverge Evo is built on an aluminum frame with a carbon fork and utilizes Specialized’s Future Shock 2 steerer tube suspension system. It’s not “real” suspension, even though there’s a steel coil spring and oil damper inside. Instead, it simply helps isolate your hands from the frame, not your frame from the ground. It tricks you into thinking it improves traction, although to be fair, it’s hard to parse how much of the improved grip off-road was the Future Shock and what was the super knobby front tire.

But that doesn’t mean it doesn’t work. It works fantastically well, and I believe this is the best application for the Future Shock concept, which mostly feels unnecessary on the road. It makes the front end of the Diverge considerably more comfortable than other gravel bikes.

The carbon fork has extra mounts on both sides for more bottle cages or a burrito holder or whatever you want. Small rack and fender mounts adorn the fork and stays as well.

The bottom bracket is threaded, the cable routing is internal through the frame (but not the bar or stem), and there’s nowhere to attach a front derailleur.

Evo, in Specialized speak, translates to “more fun than the original version.” Some of that comes down to parts spec changes, but most of it comes from small but important tweaks to geometry. Evo versions tend to be tuned for rougher, rowdier, faster descending, and the Diverge Evo is no different.

In this case, that means extending the reach about 30 mm across most sizes, shortening the stem a similar amount, and then dropping the head tube angle to 70°. Depending on the size, that’s a 0.5-1.75° drop relative to the non-Evo Diverge. It’s considerable. It’s slacker than my cross-country race bikes were in the early 2000s.

The front-end tweaks come straight from the mountain bike world, which has been steadily extending reach figures and slackening head tube angles for a decade, to the point that the Grim Donut created by our colleagues at Pinkbike doesn’t even look that crazy anymore. The result is a bike that puts the front wheel further out in front of you while retaining enough space in the cockpit. It’s a winning formula for off-road riding.

The chainstays get a bit longer as well, from 425 to 432 mm across all sizes. This makes the bike a bit more stable as well.

It’s not necessarily a winning formula on the road or on smooth gravel and dirt. I’ll get to that below.

It’d be silly to spec a slacked-out gravel bike with road-going componentry, and Specialized hasn’t. It’s 1x-only with no option for a front derailleur, and comes with a 12-speed Shimano XT cassette (our test bike had a 10-51T; Specialized’s spec sheet lists a 10-45T), XT rear derailleur, and XT shifter.

The crankset and 40-tooth front chainring are from Praxis and work great. No complaints about the drivetrain — it’s a good match for the intended surfaces this bike will see.

The same can be said about the brakes. Magura’s MT4 are a somewhat unusual choice, but an excellent one. I initially assumed their presence was simply Specialized trying to save a few bucks over the Shimano options, but credit where credit is due: somebody at Specialized clearly rode these and identified them as a perfect match to the decreased traction available with gravel tires.

I’ve found that powerful brakes can overwhelm narrow gravel tires in low-traction situations. Modulation is what you want, and the MT4’s modulation is superb. Ten points for this spec decision.

The tires themselves, 42 mm Specialized Rhombus Pros, are on the knobby end of the gravel spectrum. They’re slow as heck on the road, but hook up nicely on dirt and could even handle a bit of mud.

Those tires are wrapped around aluminum DT Swiss G540 rims, which aren’t light but have a lovely 24 mm internal width, a great match for gravel tires in the 40-47 mm range.

The Diverge Evo also has a dropper post. X-Fusion’s 50 mm Manic dropper is durable (I’ve had one on another bike for a year with zero issues) and provides just enough movement to get the saddle out of the way if you’re getting mildly growdy [gravel-rowdy, get it? — Ed.]. Another good match for the bike’s intended purpose.

My only issue with dropper posts on gravel bikes (beyond the weight) is that they don’t flex much. You lose out on a lot of all-day comfort for the sparse few moments when you might actually need a dropper. That’s not a trade I’m personally willing to make.

The only major change we made to the stock spec was the addition of CushCore tire inserts. I’ve been running CushCore on my hardtail for some time and it’s been an eye-opener, completely changing the way I ride that bike. The problem with the Diverge Evo’s progressive geometry is that it inspires you to ride faster through nasty stuff, but the tires can’t keep up. There’s a mismatch between the capability provided by the geometry and the capacity for punishment of the tires. The inserts add weight but have a dramatic effect on the Diverge, inspiring confidence through chunky trail without tangibly affecting rolling resistance. It’s a necessary upgrade if you live somewhere with rough trails.

The bars. They’re flat. Do you want that?

This isn’t really the place to rehash the “should flat-bar gravel bikes exist” debate, so let’s continue onward under the assumption that they should. It is worth trying to define who will like them, though.

The combination of mountain bike-inspired long and slack geometry, a short stem, and wide bars mean that you’re considerably more upright on the Diverge Evo than when sitting on the hoods of more traditional drop-bar gravel bikes. You’re also wider — your hands sit at the ends of a 750 mm-long bar. Gravel isn’t generally hyper-focused on aerodynamics (though there are some exceptions) but that upright, wide position is unquestionably and noticeably slower when you’re trying to ride fast on a smooth surface.

As you do on a mountain bike, you find yourself in those situations putting your hands near the middle of the bar, by the stem. But the reach to this point is so short that it quickly fatigues your triceps. It’s not sustainable.

The position is also a bit odd and even slightly floppy out of the saddle, particularly climbing. Anybody used to a the feel of a mountain bike probably won’t mind, but roadies will find the sensation unsettling, as if the bike wants to wander away in directions of its own choosing.

Unsurprisingly, the flat bars excel off road. There’s a reason mountain bikers use them (do not send me photos of John Tomac; you are not John Tomac). Flat bars offer significantly better control, more confident handling, and have a more natural hand position on the brakes. All good things off road.

That was abundantly clear during group testing when every rough section of trail saw whoever was on a drop-bar bike get gapped immediately.

Most importantly, the flat bar makes the Evo fun. That’s the primary argument in favor of gravel bikes like this, honestly. You can make performance arguments, but those devolve pretty quickly into “OK, well, just get a hardtail then.” Because the Evo is fundamentally just a bad mountain bike. But it’s also a super fun bike.

Crucially, the geometry tweaks on the Evo make it really work for flat bars. Throwing flat bars on any old drop-bar gravel bike results in a cramped cockpit with poor handling. You have to run a longer stem and that chucks your weight forward and makes the bike twitchy, negating the benefits of the flat bar to begin with. But a flat bar on a gravel bike designed for flat bars is a revelation.

What is this bike? I still don’t really know. Maybe it’s a ten year old mountain bike with no suspension fork, or a fancy hybrid, or a really terrible road bike.

But you know what it definitely was? It was the most fun bike in our Field Test. It was the slowest in many situations, it’s worse in most ways than a cross-country hardtail, it’s not even that light. It’s deeply confused. But it was fun. It put a smile on my face. So maybe none of that matters.

Disclosure: One of the investors in Outside Inc. — the parent company of CyclingTips — is Zone 5 Ventures, which supposedly isn’t technically owned by Specialized, but Specialized is the “sole limited partner” and is at least partially run by current and/or former Specialized employees (it’s complicated, and we have no idea how any of this works). Zone 5 Ventures has no influence on our editorial coverage at CyclingTips, but the optics are ugly, so we thought you should know.