A last-ditch attack paid dividends for the Tasmanian.

The 29-year-old attacked from the remnants of the peloton with roughly 3 km remaining in the 104.4 km race around Mt. Buninyong and managed to hold on for what is the biggest win of her career.

Moments later, pre-race favourite Grace Brown (FDJ Nouvelle Aquitaine Futuroscope) led the rest of the peloton home in second – her fourth podium at this race without a win – while first-year U23 rider Alyssa Polites (Sydney Uni Staminade) took third, earning herself a gold medal in the U23 race.

Roxsolt Liv SRAM, Australia’s only women’s Continental team, started the race with the deepest roster – a total of nine riders – and that team was in every move that mattered. After a sedate start to the race, it was Roxsolt Liv SRAM’s veteran climber Justine Barrow who kicked off the action on the fifth of nine ascents up Mt. Buninyong. When Barrow came to the front and increased the tempo, the peloton was quickly shredded to no more than 20 riders.

There was a series of attacks in the back half of lap 5, including a solo dig from Emily Herfoss (Roxsolt Liv SRAM), and then a promising move from Matilda Raynolds (Inform TMX Make), Alex Manly (BikeExchange-Jayco) and Georgie Howe (Knights of Suburbia). But it wasn’t until the following lap, the sixth of nine, that the most dangerous moves started flying.

Again it was Roxsolt Liv SRAM in the action, with Herfoss getting clear again. This time the move stuck and Herfoss quickly built a lead. Behind her, Raynolds was again surging from the bunch with another Roxsolt Liv SRAM rider, Tilly Field, on her wheel.

Herfoss led solo until the start of the penultimate lap up Mt. Buninyong with roughly 20 km to go. At that point, she was caught by Raynolds and Field, with Herfoss soon dropped as Raynolds and Field powered on.

At the start of the final lap, Raynolds and Field had roughly 40 seconds over the remnants of the peloton, with the likes of Brown, criterium champion Ruby Roseman-Gannon (BikeExchange-Jayco), Rachel Neylan (Cofidis), and Neve Bradbury (Canyon-SRAM) all still in contention.

Raynolds attacked Field in the bottom half of the final ascent, but a short time later, with 9 km to race, Raynolds was caught on the climb, leaving a group of roughly 10 riders at the front of the race.

There was another flurry of attacks in the final lap. 2010 winner Ruth Corset (VA Pro Racing) was on the move on the climb, Neylan led solo for a brief moment, but coming into the final kilometres of the race, the group was back together and a reduced bunch sprint was on the cards.

That was until Frain punched away from the group through the grounds of Federation University – the most technical section of the course.

“In my last lap, I was on the front and I thought ‘I trust my cornering,’” Frain said later. “’I think I’m pretty good with that in the uni.’ You see that happen. And I thought, if I just get a little bit of a gap, I’m just … I’m all in. It’s now or never because, you know, having Ruby [Roseman-Gannon] and that still there, I didn’t want them there, not for me.

“So the gap opened and then I was like ‘Just don’t time trial like you did on Wednesday, and you’ll be fine.”

Frain had been disappointed with her seventh place in Wednesday’s Nationals TT, but it was a strong TT effort that ultimately netted her victory on Sunday.

At first, she seemed likely to be caught. But a lack of impetus in the chase group helped to give Frain the space she needed.

“Nicole attacked, and initially I thought it wasn’t risky because we were coming into the sprint,” Brown said after taking the silver medal. “I thought the teams with multiple riders would start putting the pace on a bit earlier than they did and that she would be reeled in.

“But really, the group sat up a bit and it wasn’t a good moment for me to attack then. So I just had to sit in and prepare for the sprint and hope that I could do something there.”

Frain, meanwhile, had her head down, trying desperately to hold on.

In the end Frain had enough time to look back, confirm she had the win, then throw her hands in the air as she crossed the line.

It was four seconds before Brown led a 12-strong chase group across the finish. Brown had taken silver for the second year running, to add to her two bronze medals in 2018 and 2020. Despite coming so close to a year in the green and gold – again – Brown was buoyant after the finish. She’d started as the only FDJ rider, giving her no support out on the road.

“I was happy with my race,” she said. “It was obviously really hard being just on my own out there. I couldn’t follow every move and I was pretty marked whenever I did something. So I think with how the race played out I did everything that I could, and I was really happy that I could win the sprint in the end with quite a few riders still left there.

“So, yeah, I’m happy with second. I would obviously have liked to have gotten the gold medal in the road race because I have a few silvers already. But yeah, it was a good race.”

Third across the line was 18-year-old Polites who, 12 months ago, was racing to victory in the U19 ranks. Her two medals – bronze in the elite race and gold in the U23 race – came as a huge surprise.

“I was just trying to ride efficiently, fuel well, and drink well,” Polites said. “Honestly, I was just trying to stay in the bunch. I thought to look at Anya Louw and obviously, Neve, and Emily Watts, for U23, and I was sort of still in the bunch and it was really moving and we started catching all the other girls. And then I thought I’d just give it a crack in the sprint and see how we go.”

With Roxsolt Liv SRAM due to do some racing in Europe this season, Frain should get the opportunity to show off the green and gold bands in the sport’s heartland. And Looking further ahead, Frain is motivated to take that next step – to land herself a WorldTour contract.

“I want a career, 100%,” she said. “I’m definitely stepping a little bit deeper into it this year, a bit further away from my job. It sort of feels like a bit ‘now or never’ for me. So yeah, I want it.“

More immediately, Frain, Brown and Polites will all now head over to Adelaide for the Santos Festival of Cycling, an event that replaces the COVID-affected Santos Tour Down Under for the second year running. 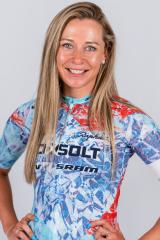