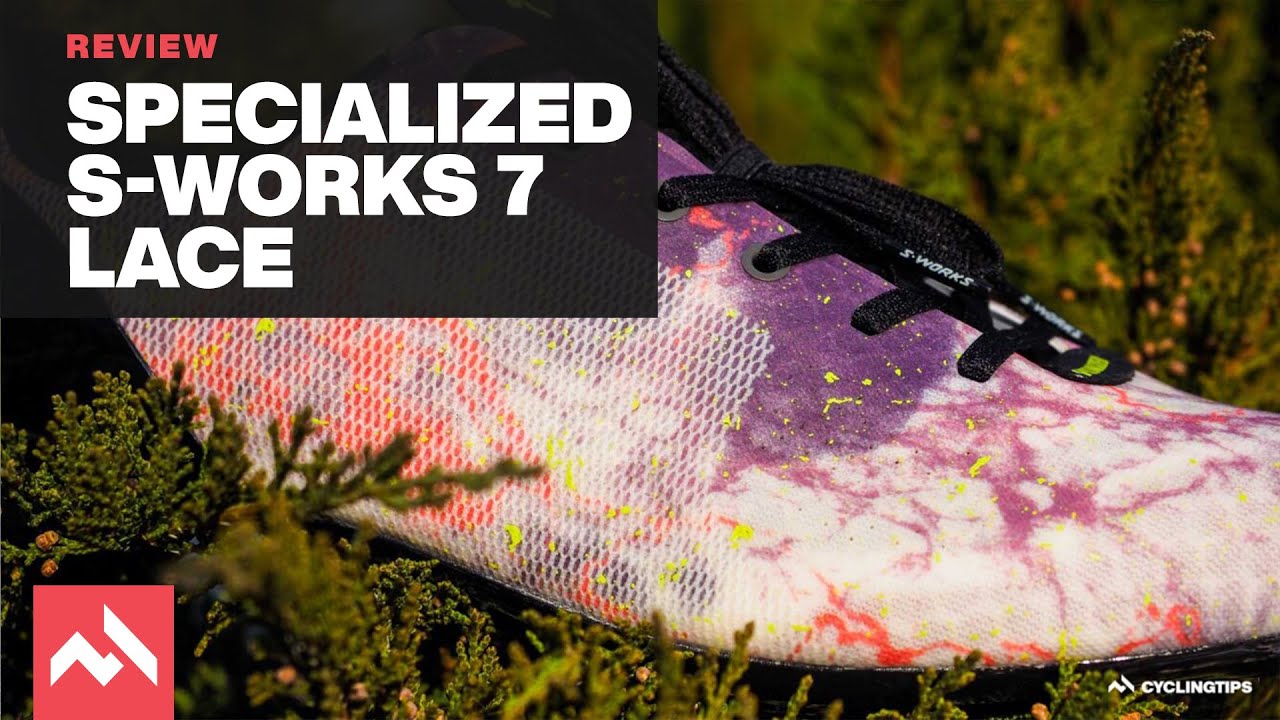 The same lace-up quirks as usual, but with an updated fit and racier feel (and, unfortunately, more weight, too).

The Specialized S-Works Sub6 was a lace-up variant of the standard Boa-equipped S-Works 6 road shoe that offered the same foot-hugging fit and ultra-stiff carbon sole, but with an even-lower weight and a more traditional aesthetic. It was much loved by connoisseurs that were willing to deal with the quirkiness of laces to gain the super-even fit and classic good looks, but apparently not loved enough to justify an updated version when Specialized announced the S-Works 7 just two years later in 2018.

My guess is that the business case might not quite add up for high-end lace-ups, but clearly a dedicated crew within Specialized got their way as today the company has announced the long-overdue S-Works 7 Lace (which I’ve been fortunate to have been riding for the past couple of months).

Putting the pieces together

Then again, getting the S-Works 7 Lace across the product development line may have been a little easier given that it’s in many ways a parts bin special. The upper is the exact same as what Specialized already uses on its gravel-focused S-Works Recon Lace (just without the burly plastic toe cap), and borrowed from the current S-Works 7 is the same Powerline carbon fiber plate and external heel cup. Put the two together and — voila! — you’ve got yourself the S-Works Lace 7.

As compared to the more leather-like microfiber used on the S-Works Sub6, the new S-Works 7 uses a higher-tech laminated mesh and TPU that’s thinner, more pliable, and less prone to stretch than before. Specialized hasn’t changed the number of lace eyelets so pressure is still very evenly distributed across the top of the rider’s foot, but those eyelets are now reinforced to eliminate the stretching and tearing that afflicted some long-time Sub6 users (myself included).

In terms of the shape, Specialized has incorporated the same subtle changes here as on the S-Works 7. As compared to the previous generation, the external plastic counter doesn’t clamp down on the top of your heel quite as aggressively as before, there’s a little more room around the big toe, and while the toe box itself isn’t technically any bigger, the sides are more upright so there’s effectively a little more room for your piggies to wiggle around.

Down below, that Powerline carbon plate once again incorporates 1.5° of varus wedge that Specialized claims delivers better pedaling mechanics, along with a healthy amount of arch support, fancy titanium three-bolt cleat inserts with 5 mm of fore-aft adjustability, and a vent under the toes. The insole carries over, featuring the company’s trademark Body Geometry “metatarsal button” — basically a little bump just behind your toes that supposedly helps keep your foot from collapsing to maintain blood flow.

I should first make it clear that the S-Works Sub6 is quite possibly my favorite road shoe ever. It fits me extremely well, it’s very lightweight, it’s incredibly comfortable, it breathes well in hot weather, and I love its minimalist, classic aesthetic. I love it so much that I now have a spare pair in reserve (still in the box!) should something unfortunate happen to my primary set.

In short, the new S-Works 7 Lace had big shoes to fill (pun intended).

As promised, the S-Works 7 Lace indeed feels like a higher-performance shoe than the old S-Works Sub6. The upper material is less stretchy than what Specialized used before, lending a more structured feel that comes across as more supportive and efficient. It holds very securely, too, with nary a hint of slip in the heel and a very snug fit through the midsection. The carbon sole is also super stiff, with zero detectable bending or torsional movement.

In other words, the S-Works 7 Lace feels more like a conventional race shoe than the S-Works Sub6 did in terms of how it behaves when you’re putting the power down.

Despite that more structured personality, the S-Works 7 Lace is also exceptionally comfortable (at least assuming Specialized’s last works well for your foot shape, which it does for me). It’s somewhat remarkable to me how the upper material is so resistant to stretch, especially given how thin it is. And whereas Specialized makes a big deal of the non-stretch Dyneema material infused into the standard S-Works 7, there’s no mention of it here, so presumably that mesh-plus-TPU laminated construction does a sufficiently good job on its own.

“I find the uppers extremely supple, especially around the toe box, giving an accommodating fit and accepting irregular bumps and lumps on the foot in a way that more structured shoes do not,” he said.

As a nice bonus, the stuff seems to breathe quite well, too.

Iain did note some discomfort around the inner ankle area, but that may vary with different foot shapes; I didn’t have any issues there.

Regardless, the newly reinforced eyelets are a huge improvement over the non-reinforced holes on the S-Works Sub6. Over time, those eyelets were prone to stretching and tearing, but there’s no concern of that here.

So far — and granted, it’s only been a couple of months in overly dry weather — my test pair have even held up well in terms of dirt and grime. That said, prospective buyers who will even occasionally find themselves in inclement weather would be strongly advised to stick to the all-black or wacky printed pattern instead of the all-white, unless you want to spend far too long after rides with a box of baby wipes.

Overall, the new S-Works 7 Lace is unquestionably a better shoe than the S-Works Sub6. So then why am I still a little lukewarm about it?

I’d argue that, for a lot of people, the appeal of a lace-up road cycling shoe isn’t solely limited to performance. At least for me, it’s the more even fit of all those criss-crosses the laces make across the top of your foot and the way you can use modified lace patterns to further tune the fit. It’s the classic aesthetic. And at least in the specific case of the S-Works Sub6, it was the way the microfiber material mimicked actual leather with that oh-so-slight amount of stretch.

With that stretchiness eliminated, there’s a subtle compliance that I find missing in the S-Works 7 Lace. Yes, the material is thinner and more pliable — and more accommodating in some ways as a result — but it doesn’t feel like it forms to your foot like the old stuff. And that higher-tech material also strikes me as being a little more sterile emotionally.

“S-Works Sub6 and S-Works 7 Lace upper materials are very similar in regards to stretch, with the Sub6 perhaps having slightly more,” explained Specialized footwear category director Nick Gosseen. “That said, the S-Works 7 Lace has more layers, which we’ve constructed to be able to stretch over bony structures in the foot, without feeling loose over time.

“The feedback has been overwhelmingly strong in support of the fit of S-Works 7 versus S-Works 6 and Sub 6, in particular the mid-foot and collar fit. We wanted to keep that magic, but introduce a new version that allowed us to increase suppleness just a touch more versus the S-Works 7.”

Those new eyelets might be fantastic in terms of longer-term durability, but they’re also pretty stubborn in the sense that the laces don’t slide through them very well. It’s therefore a little harder to get that perfectly even fit than it should be, and as if getting lace-up shoes on and off isn’t inconvenient enough, the new eyelets now make it more so. I never had any issues getting the lace tightness just right the first time when using the S-Works Sub6, but there were a few times I had to readjust the S-Works 7 Lace until I got more acquainted with its quirks.

“The eyelets around high-stress areas reduce the risk of tearing and keep lacing pressure consistent (as the hole doesn’t stretch over time/under load as I have found on Giro Empire SLX, for example),” Iain said. “But this comes at the expense of some added resistance and makes it slower to get the shoes on/off.”

Last but not least, there’s the issue of weight. Those old S-Works Sub6 shoes were wicked-light at just 388 g for a pair in size 43. The new S-Works 7 Lace? They’re 440 g for the same size. That’s still very light — and 38 g lighter than the standard S-Works 7 in the same size — but whereas the S-Works Sub6 was a darling among the weight weenie crowd, the S-Works 7 Lace will invariably be seen as a step backward in that respect.

Does 38 g have any real-world impact on performance or feel? No, of course not. But that’s not the point, and Gosseen is of the opinion that it’s grams well spent.

“We feel that the tradeoff will be increased comfort for a wider range of foot shapes, while also providing the level of performance that S-Works riders have grown to appreciate and expect.”

To me, the old S-Works Sub6 was a shoe that maybe didn’t make much sense on paper, but it appealed to the emotions. It maybe wasn’t ultimately viewed by riders as a proper race shoe, but then again, I think that was the point. In the S-Works 7 Lace, however, I feel like Specialized legitimately tried to make a technically superior lace-up shoe, and in doing so, also reach out to those that perhaps didn’t feel like the S-Works Sub6 was a “real” performance option.

That said, I find all of the marketing images Specialized provided in the S-Works 7 Lace press kit to be somewhat telling. On the surface, the shoe is supposed to be more of a high-performance option ostensibly intended to lure in more competition-minded buyers. And yet, all the riders are pictured on the company’s S-Works Aethos road bike: a machine that’s explicitly designed not for racing, but for more emotive aspirations like ride feel.

In most ways, the S-Works 7 Lace is indeed a better shoe than what came before it. The last will be more accommodating for a wider range of people, the hold is more ironclad, and it should almost certainly be more durable. But the more highly engineered material also feels a bit sterile to me, and I miss the subtle stretchiness — the gentle coddling — that the old material provided.

And truth be told, I’m not sure if making a lace-up shoe more proficient in an engineering sense is the way to go, anyway. Most technically minded riders probably aren’t going to be looking at a lace-up shoe in the first place, particularly if it’s markedly heavier than its predecessor.

So yes, I think the S-Works 7 Lace is yet another superb high-end shoe from Specialized. In my head, I know it’s better than the S-Works Sub6.

But let’s just say that I’m not sure yet if I’ll go out of my way to find another pair to hold on to in reserve.