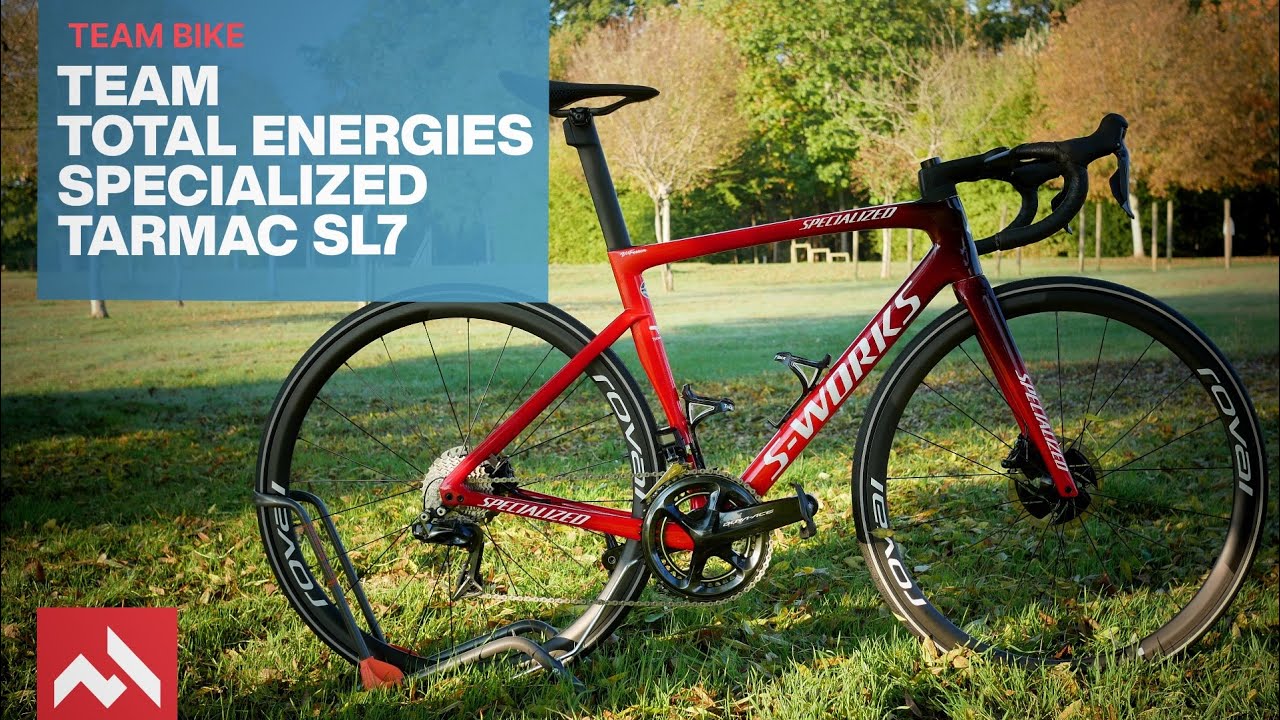 Here's the bike Peter Sagan and co will ride at TotalEnergies in 2022: the new Specialized Tarmac SL7.

Jean-René Bernaudeau’s long-standing team, currently known as TotalEnergies, has seen many bike sponsors come and go in its 20+ years. From the team’s early days as Equipe Bonjour through to today’s petroleum-company-sponsored iteration, the team’s ridden a plethora of desirable bikes (some more desirable than others). Time, Colnago, BH – they’ve all been in the mix. For 2022, the team’s swapped out its fleet of Wilier bikes for Specialized.

With a certain Mr Sagan joining the team for the 2022 season, it was no surprise that Specialized came along for the ride. This season, the team will start on the S-Works Tarmac SL7, a bike that Sagan is more than familiar with.

There’s no change in equipment for the Slovakian and his entourage that have come across from Bora-Hansgrohe. For the riders that have been with TotalEnergies previously, though, they’re in for a huge shakeup. Specialized isn’t just supplying frames but also shoes, helmets, saddles, and obviously the bars and stems, those being proprietary components to the Tarmac frame. Wheels also come from Specialized’s in-house brand, Roval.

In October, we got to take a sneak peek at the new bikes at the team’s service course near Nantes, France. Riders were on hand collecting their training bikes for the winter months ahead. Each had been built up from their recent bike fit which, also unsurprisingly, was done by Specialized’s Retül gurus.

A few slight corners had been cut to get the training bikes ready. If you look closely, the full Shimano 11-speed Dura-Ace Di2 groupset may look slightly used. There are a few scuffs here and there. This is because even a professional team with one of the biggest bike brands backing it has had trouble acquiring new components.

The rest of the components supplied by Specialized are understandably brand new for winter use; there’s no supply chain issues when it comes to house-brand items for that brand’s teams. Roval’s lightweight Alpinist CLX wheels are also far from what you’d class as a “training quality item”. All in all, it sure makes for a desirable training bike.

At a claimed 7.1 kg for a size 54 cm bike, the training rigs are far from weighty, but the question needs to be asked: where can the team mechanics find 300 grams to drop the bikes down to sit on the UCI’s legal weight limit for race day? Will they even bother?\

Tyres are one area where weight could be shod. The Specialized Roubaix Armadillo Elites aren’t the lightest rubber available to the team. Either way, we will chase this up in a future video with the team.

One interesting fact worth noting is that team bikes do differ from every other Tarmac out there. No, it’s not the carbon lay-up or the geometry that differ; both of those are exactly the same as every other Tarmac available to the public. Instead, it’s where the frames are actually painted. Rather than the frames coming directly from the factory ready painted, Specialized has all team frames shipped unpainted to Italy, where they have a paint shop ready to make them look as pristine and lovely as possible. And, in the case of the new TotalEnergies team colourway, that’s arguably pretty damn lovely indeed.

Trust me; the camera struggled to pick up the intricate detail that the paint shop and designers have managed with the team’s red fade; there’s a slightly mottled effect across the whole bike. All I can say is if you get the chance to look at one up close, definitely do. It’ll be a treat for your eyes.

If you want to know more about this bike, then hit the play button on the video above. And, as a bit of extra motivation to do so, I’ve included a treat for those who like a quality workshop. TotalEnergies’ workshop at the team’s service course is far and away one of the most rustic, rural and oh-so-French workshops I’ve had the pleasure of making myself a nuisance in.

The camera may not have picked up the mottled paint effect of the frames so well, but amazingly it’s managed to pick up the oily, dusty, smell oozing out of the old wooden beams of the barn.