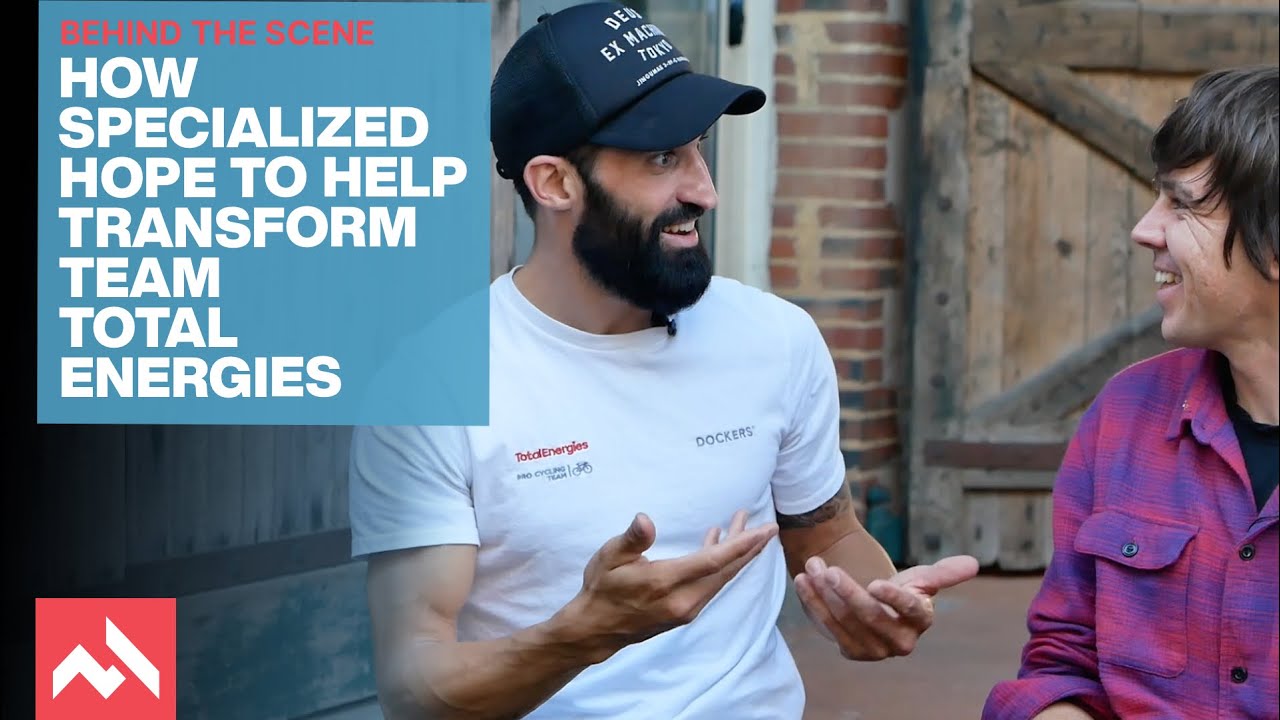 Transforming a team: How Specialized and TotalEnergies are working together

We know why TotalEnergies and Specialized are working together, but how's it going so far? We went along to a team camp to find out.

An hour’s drive south of Nantes, France is the small town of Essarts-en-Bocage. It’s charming and ticks all the right boxes if you’re looking for a typical French commune. There are the usual boulangeries, a Tabac so you can pick up FDJ scratch card and some Gitane cigarettes, a well-kept church, a noisy primary school (more on that later), a couple of cafes, and a square with only a handful of cars circling it.

Then there’s one building that doesn’t exactly stand out, but also doesn’t blend in due to the fleet of colourful cars and buses sitting out front of its dusty white facade. In a previous life, this “small” chateau was just that – a chateau for a local well-to-do farming family. Unfortunately, it slowly fell into disrepair; then, after some extensive refurbishment, it became quite possibly the most unique service course in cycling … or at least the most unique service course that I’ve had the privilege of visiting.

This is the home of Team TotalEnergies.

I’m sure you’re more than aware that TotalEnergies has gone through somewhat of a slight change over the offseason. Heading into 2022, the French ProTeam hasn’t just shaken up its usual French-heavy roster with the signing of a couple of Sagans, an Oss and a Bodnar. It’s also stirred the pot by mixing in a couple of new technical sponsors.

Back in late October, I was invited along by the team’s new equipment sponsor, Specialized, to attend the first gettogether of the forthcoming season. The 2021 season had only just wrapped the day before with the low-key one-day race Boucles de l’Aulne-Châteaulin. Team trucks and buses were being unloaded for the final time of the year as I arrived for this first get-together … or semi-get-together as it would turn out to be.

The reason for this very, very early get-together was so that team riders could familiarise themselves with all the new equipment they’d be using in the upcoming 2022 season. And there’d be lots of new kit. The four big-name signings of Peter and Juraj Sagan, Daniel Oss, and Maciej Bodnar each got a free pass to not attend, which was disappointing but understandable. After all, each has a long-standing history of using Specialized bikes, shoes and helmets.

For the rest of the team, it was a three-day schedule of bike, shoe, and kit fitting, learning about the new equipment, and the people behind the gear.

Specialized had multiple Retül fitters on hand, spending half a day with each rider with the aim of not just nailing their road position, but starting the process of perfecting their time trial position too.

Specialized also brought along its team of shoe designers and fitters. It was a top-to-tail process of getting the old guard of TotalEnergie as comfortable as possible on all the new equipment. Equipment that was quickly filling the team’s warehouse.

I’d been invited along to witness this all first-hand, to see how a company like Specialized with all its whizz-bang tech know-how, was going to (hopefully) work seamlessly with a team that, to put it kindly, is quite traditional.

It’s not the first time Specialized has been in this position. The last time the team used its expertise and know-how to develop a ProTeam (or Pro Continental team as it was back then) was at the end of 2016, with the then Bora-Argon 18 team. Five years on, I think it’s fair to say that Bora-Hansgrohe, a team still using Specialized equipment in 2022, is an entirely different beast from what it was only a short few years back.

The question is: can they do it again?

Can Specialized bring everything they’ve leant from not just their Bora days, but their QuickStep and even Aqua Sapone days, and work alongside a team that has been established for 20-plus years? A team which seems from the outside to have a culture that’s the “Frenchest” of French?

Can Specialized not just score results with Sagan, but can the company help raise the team’s level quickly, leveraging their expertise and equipment enough for the team to get invited to all the major races; races that Sagan has been used to doing year in year out?

There is a second question, too; one that’s equally enticing (at least to me). Can the “Californian dudes” at Specialized learn a thing or two from Jean-René Bernaudeau and his squad of stage-hunting hopefuls? Can a team that has shown, if not results, then huge amounts of passion and heart over their many years of existence, work in harmony with a Silicon Valley-based bike brand?

Will this new partnership be one where they listen and learn from each other, where they grow and develop in the best possible way? Or will it end up looking more like The Odd Couple?

I plan to follow this story in the coming season. I want to track how each side is adapting to its place within this new “family”, to see what family quarrels there are (because we know there will be some!). To see if this hopeful partnership generates noteworthy results. COVID pending, expect me to dip in and out of team camps, recons, and races throughout the season. It should be très intéressant!

To get things started, check out the video at the top of this article, from the TotalEnergies camp in late October.