Mark Padun (EF Education-EasyPost) on his way to stage 4 ITT victory at the first edition of Gran Camiño.

Mark Padun, the only Ukrainian rider in the WorldTour, took a terrific ITT win on the final day of new Spanish stage race Gran Camiño. “I feel amazingly happy because this is my first race with my new team, and we started already the first stage with a victory with Magnus,” Padun said after the stage. “Then I was good on yesterday’s stage, and today I finished the race with a stage victory and also top-three on GC, so it’s an amazing result for me.”

Padun’s first appearance for EF Education-EasyPost couldn’t have started on a worse day for the Ukrainian, stage 1 falling on Thursday February 24, the day Russian forces invaded his home country after peace talks failed to deter hostilities.

“For sure I can’t be completely happy because of what’s happening in my country,” Padun said, “but otherwise I want to share this victory with all my citizens. I am here and I support as much as I can the situations to follow.

“I also want to say thank you to my girlfriend because she’s been following me the whole race and writing me every day, so I’m so amazingly happy.”

Thursday’s stage 1 ended in a hectic bunch sprint which was won by Magnus Cort, who dedicated the victory to his versatile Ukrainian teammate, his last support rider in the finishing straight.

Padun stayed there or thereabouts in the following stages, both on the more lumpy terrain that he thrives on – he came of age with back-to-back mountain stage wins at the 2021 Critérium du Dauphiné – taking a strong fifth on stage 3 and moving up to sixth overall before the final showdown.

Stage 4’s 15.8 km lumpy ITT is Padun’s first time trial victory since his 2019 national title, and he attributed today’s success to the hard work he and his new team put into his time trial position over the winter. What’s more, his 20:19 effort saw the 25-year-old vault from sixth to third overall behind Alejandro Valverde (Movistar) and overnight leader Michael Woods (Israel-Premier Tech).

“I’ve been thinking about [GC] yesterday because I knew the TT was going to be quite fast and I’d been hoping to [move into] the top-three,” he said. “But I wasn’t thinking that I really can win this, I’d been targeting more like top three on the stage, but victory is the best and I’m super happy.” 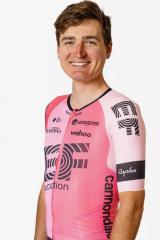 Mark Padun (EF Education-EasyPost) on his way to stage 4 ITT victory at the first edition of Gran Camiño.

Who is the Dauphiné's breakout star, Mark Padun?

Who is the Dauphiné's breakout star, Mark Padun?