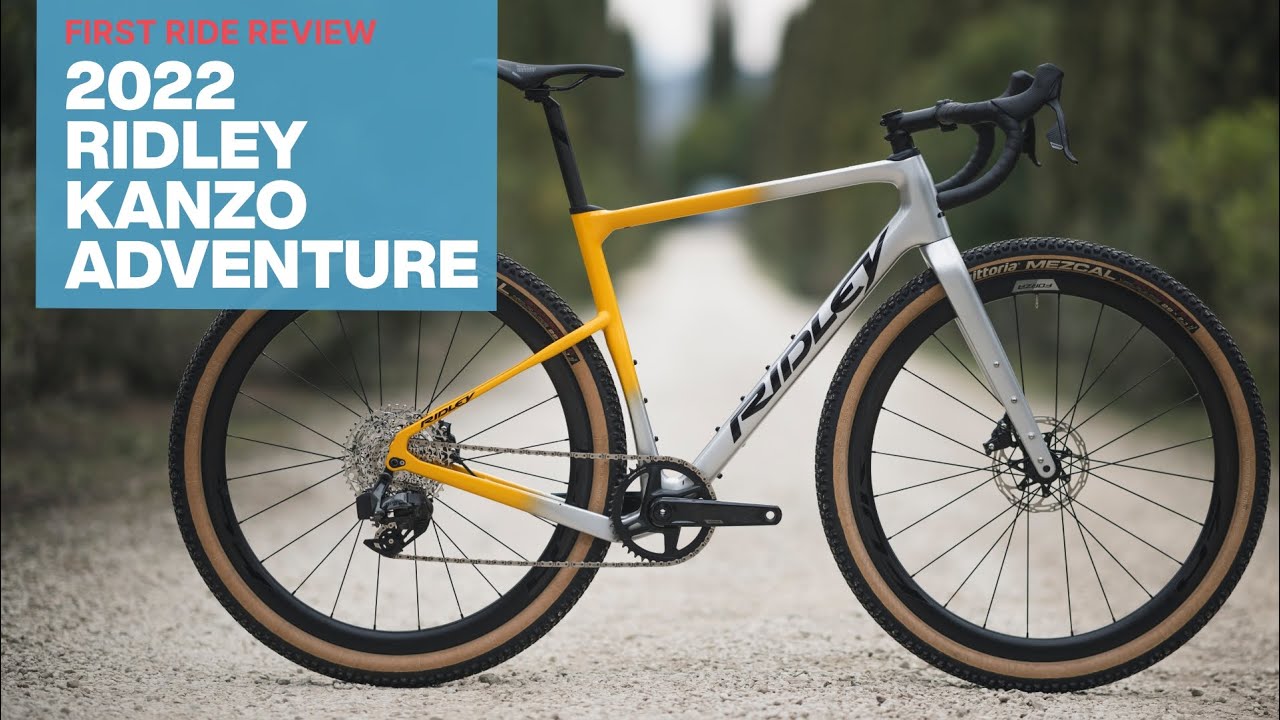 You can customize the bike using Ridleys online program for an aditional €100.

The Belgian brand gets serious about adventure.

You can customize the bike using Ridleys online program for an aditional €100.

Usually, when we attend a bike launch, especially if it’s for a new road bike, brands will inundate us journalists with a whole head of data. You know, the usual jargon; aero this, comfort that, stiffness there. So when attending Ridley’s recent launch for their all-new Kanzo Adventure, it was a breath of fresh air when they gave us a quick five-minute sales pitch that would have fit on the back of a playing card. After all, how much tech do you really need in a rough and ready adventure gravel bike?

I could sum this first-ride review up in under 10 words. I won’t. At least, not yet. So what is new for the updated 2022 Kanzo Adventure?

If you’re looking for groundbreaking, innovative, or gimmicky, then look elsewhere, as the Belgians have done what they do best here: produce a bike that does its job well without faff or fanfare.

In Ridley’s press releases and talking with the staff, they don’t mention the outgoing Kanzo Adventure at all; I didn’t even know it existed until I jumped on their site a few days later to write this article. It’s as if they don’t want to acknowledge it. Instead, they only compare the new bike to their nippier, aggressively orientated Kanzo Fast. A bike that handles exceptionally well on loose-pack gravel but one you wouldn’t want to take too far into the rocky wilds due to its snappier handling and lack of support for luggage.

The new Kanzo Adventure would seem to be a ground-up project; it’s as if they’ve started from a clean sheet of paper.

For the new bike, Ridley, like many brands, has opted for geometry choices that smack of details taken from the world of mountain biking. Slacker head angles, a lower bottom bracket, and shorter head tubes that are designed to accommodate suspension forks (if you wish). The steeper seat tubes and longer wheelbases match what is on-trend for more extreme multiday, wild-riding adventure gravel bikes. All this is ideally suited to what this bike is intended to handle and better distinguishes itself from the Kanzo Fast. Because of this, Ridley’s refreshed gravel lineup now feels a touch clearer than before, with bikes that don’t overlap so obviously in what they have to offer.

For instance, when comparing the Adventure (in a size M) to the Kanzo Fast, which much of Ridley’s press release does, the new stack height on the Adventure is 4 mm taller (591 mm) and has a reach that is 6 mm longer (401 mm). In addition, chainstays are 10 mm longer at 435 mm and with a head angle of 70.5° over the 71.5° of the Fast. Finally, the bottom bracket of the Kanzo Adventure sits lower at 75 mm versus 72 mm.

If we compare it to the outgoing Adventure, its wheelbase has become longer, as has the reach, and the stack is taller across the board. Meanwhile, the head tube is shorter and slacker by 1º. It doesn’t appear to take any traits from the previous model.

It seems gone are the days when weight was high up on the pecking list of desired features. Instead, Ridley openly stated that they didn’t have this as a priority when developing this bike; rather, robustness, which is entirely understandable, was a big focus. That decision is reflected by the 1,250-gram claimed figure for an unpainted frame. A full Rival XPLR AXS option with carbon wheels tips the scale at just over 9 kg.

Beefing up the robustness of the frame has allowed them to produce a bike that should be able to handle whatever you want to carry, to an extent. Fork mounts allow for 3 kg on either leg or if you use a lowrider and mount at the fork crown, you can up that total weight to 9 kg. The bottle cage boss locations have been placed so as not to interfere too much with getting a 750 ml bottle in and out when you carry a frame bag. And all tubes square off to some degree to make the contact point between bag and frame more secure. Unfortunately, there are only mounts for fenders on the rear stays.

With the limited cables needed on a wireless setup (just the brake hoses), Ridley staff quickly pointed out that though bars and stem are fully integrated, aero gains aren’t the reason. Instead, Ridley’s internal technology, coined the F-Steerer, allows the cables to be tidily hidden away; this allows the ease of attachment of handlebar bags, GPS mounts, and lights.

If you’re thinking of mounting a dynamo, that is also thoughtfully taken care of. Internal routing inside the fork leg and along the top tube to a port at the top of the seat tube allows dynamo cables to be hidden away. If you don’t want to use a dynamo, all holes for mounting can be covered with rubber grommets. It’s a nice little touch.

The frame has plenty of clearance for not just fitting up to 29×2.1″ rubber, but also for space for them to spin freely no matter how mudded up they get. And before you ask, no, this hasn’t been developed with 650Bs in mind.

Ridley will be offering the bike in five sizes, ranging from extra small through to extra large, and in three stock builds, all with the same frameset. The cheapest offers a Rival1 build (42T, 11-42) with parts from Ritchey and in-house brand Forza, including their Forza Norte Gravel tubeless-ready wheelset. Retail price: €3,475 / £3,159 / US$4,589.

The bike I tested came with SRAM’s latest electronic groupset, the Rival AXS XPLR. For true adventurists, I’m guessing they’d scoff at an electronic setup; service and quick fixes out in the wilds on multiday adventures are far more suited to a mechanical setup. But then the same can be said about carbon frames. But for who I honestly think this bike is aimed at and who will buy it, the groupset is a perfect addition.

It’s the first time I’ve had the opportunity to use the new Rival XPLR, and I’m impressed. Compared to Force AXS or Red AXS, the lever shape feels superior to my hands. If you’re a SRAM fan or even SRAMcurious, I wouldn’t look any further than the Rival groupset for gravel riding. The fact that it’s capable of becoming a mullet setup is also a boon.

The gearing I rolled around on was more than wide enough with a 42 chainring matched to a 10-44 cassette. Those wanting more gears may miss the lack of a mount for a front derailleur, but the bike allows for the Classified rear hub to be installed without any additional adaptors. It really does open the door for a whole host of gearing options. Yes, that chainset is an anchor, but it’s the only real letdown in the whole groupset.

Ridley offers the bike on its online configurator, a customizable program where you can choose what paint scheme takes your fancy and change out parts. Through this, a lighter chainset is an easy fix.

Wheels on the test model came with Ridley’s in-house parts brand Forza’s Levanto Gravel Carbon, which is both tubeless-ready and has a spacious 23 mm internal rim width. The Vittoria Terreno Dry TLR 47 mm were perfectly suited to the terrain we took on in Tuscany; not too technical, mostly loose gravel with some chunky rocky sections in places. They also rolled nicely on the tarmac.

Bars, stem, and seatpost on this offering were again all from Forza. A no-frills standard 27.2 mm carbon seatpost is very much appreciated over a proprietary shaped post. And the same can be said for the bars and stem. Though not bling in any way, they both performed as you’d expect.

I will say that the Forza gravel bar that came with the bike I liked very much. The flat top mixed with a short drop and a 16º flair didn’t have me wanting for any other hand positions. I’d say it’s a shame that the retail models come with Ritchey Venturemax bars, but I’d be lying, as I have these on my personal gravel bike and truly like them.

Saddles are a personal thing, so I won’t go into that, but it’s certainly nice to see a quality branded part, in this case, a Selle Italia X-LR.

In just a short few years, the gravel scene has flourished. It’s become its own beast with a myriad of subcategories, or at least a wide gambit of options as to what brands think gravel is all about. And it’s understandable; gravel is personal and depends on what terrain is on offer in your region.

So with this in mind, it’s nice to see that Ridley, a Belgian brand with its R&D offices in an area that doesn’t have the most extreme gravel on offer, is producing a bike that should appeal to those who do.

As I state in the video above, the Kanzo Adventure really does fall slap bang in the middle of what brands classify as gravel bikes. Not too extreme with its design choices nor too conservative. I feel they’ve thought about the average end-user with the new Kanzo Adventure. They’ve moved with what people expect from a gravel bike today, not just what the European market classes as gravel. The outgoing Kanzo Adventure felt a little sub-standard, a little generic, dare I say old-school gravel. This feels modern.

Yes, there are those out there that will be screaming that it’s not “adventure” enough, but for most, this should offer enough.

Please remember that I’ve only had the opportunity to throw a leg over this bike for two days of riding and on gravel that is far from technical. But those two days gave me a good idea of what it has to offer. It hums along nicely enough on the open roads for an adventure bike; a lot of which was down to the tire choice, I feel. But even descending on the road, it feels responsive and not out-of-place on fast tarmac. On the gravel, it was a blast – stable and responsive and confident in all the situations I threw at it.

I could see myself being happy enough to get out on it for long days and not getting frustrated at it, either lacking on the road or trail. It is a well-balanced bike. And the weight at nearly 9 kg on the nose doesn’t hold it back.

We’ll aim to get one in for an extended review period to see what it’s really capable of, and on roads, trails, and tracks I’m familiar with. After all, testing a bike in Tuscany on routes that are a delight to play on can easily cloud any judgment.

All in all though, Ridley has produced a bike that, in the current market, offers a lot for its price point. And as for that sub-10-word review, well: “it does exactly what it says on the tin.”