A day after saying that he was feeling well-prepared for Sunday’s Tour of Flanders despite his late start to the season, Mathieu van der Poel (Alpecin-Fenix) provided evidence of his form with an emphatic victory at Wednesday’s Dwars door Vlaanderen.

The 184 km race came down to a thrilling finale as a select group of contenders worked their way clear of the pack and then battled each other in a flurry of attacks and counterattacks. Van der Poel put in the work to chase down several moves himself.

In the end, Van der Poel and Tiesj Benoot – whose Jumbo-Visma squad looks like the team to beat so far this Classics campaign – powered away inside the last 2 km. There would be no catching them from there, and there would be no stopping Van der Poel on the finishing straight.

The 27-year-old Dutchman cruised to a convincing win in Waregem, while Benoot settled for runner-up honors a second later. Tom Pidcock (Ineos Grenadiers) arrived five seconds behind Van der Poel to claim third on the day.

For Van der Poel, the win is an encouraging signpost ahead of the Tour of Flanders. Although he has not put in as many race days so far this year as he might have liked, Van der Poel now has two victories on the season already, and there’s little doubt that he will be in the mix as he takes aim at his biggest Classics goals.

“I wasn’t sure I was the strongest in the lead group. I was fine but not necessarily at my top,” Van der Poel said. “I hope to be on Sunday.” 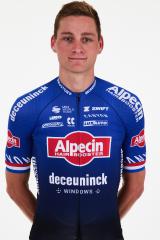