The race as a whole was chaotic with crashes impacting the finale. Elisa Balsamo didn’t wait long to take her second WorldTour win of the season. The world champion won Exterioo Classic Brugge-De Panne on Thursday, four days after her victory at Trofeo Alfredo Binda. Balsamo wasn’t Trek-Segafredo’s top rider for the finale in De Panne but a late-race crash impacted Chloe Hosking and put the pressure on Balsamo to take on Lorena Wiebes (Team DSM) in the sprint. Wiebes still managed to finish second with Marta Bastianelli (UAE Team ADQ) finishing more than a bike length behind in third.

“It’s totally a surprise because I was working for Chloe Hosking but in the last km she told me there was a crash and I would have to sprint, so it’s a big surprise but I’m very happy,” Balsamo said at the finish. “There were a lot of crashes in the last km so the team was missing a lot of riders. I had to try to find the best position.”

A windless race allowed the peloton to remain intact late into the day, even after teams tried to split it up on De Moeren, everything came back together into the final 20 km.

Mieke Kröger set off on a lone attack with 18.3 to go, which was lucky for the German who managed to avoid a massive crash in the final 16.9 km that took down most of the peloton. The crash happened as the road narrowed and split on either side of a hedge. Riders were strewn all over the road and in the hedge itself, and only a few made it through the tumble unaffected.

Three of the pre-race favourites Balsamo, Wiebes, and Emma Norsgaard (Movistar) were among the riders who managed to stay in the much-reduced peloton but a large group had to fight to regain contact with the front of the race before the final 5 km started.

As the finale drew near UAE Team ADQ and Movistar made sure the pace was high for their sprinters Bastianelli and Norsgaard. The course as it navigated through town featured a lot of tight corners and narrow roads and the fight for position was important.

In the final run-in to the finish, it was Le Col-Wahoo who led the peloton with Norsgaard and Balsamo close to the front. Kopecky was the final lead-out for her teammate Lonneke Uneken but once Balsamo opened up her sprint no one could contend with the world champion.

It was another fantastic win in the rainbow jersey for Balsamo, who made the switch to Trek-Segafredo at the end of last season.

“My parents are here and they really love cycling, and I am very happy they are here and today was a good win for them to see,” Balsamo said. “Winning with this jersey is amazing, I have big emotion. I want to enjoy this jersey from the first day to the last day.” 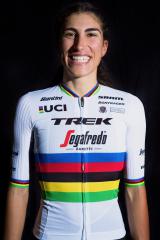