After a crash derailed his GC hopes at Paris-Nice, the 23-year-old American went on the hunt for stage wins, coming up big on Thursday.

Brandon McNulty claimed (UAE Team Emirates) his first ever WorldTour stage win on Thursday, making the most of a day in the breakaway at Paris-Nice. The 23-year-old American crossed the stage 5 finish line nearly two minutes ahead of runner-up Franck Bonnamour after going solo with a little less than 40 km to go, salvaging his race after a crash derailed his GC ambitions.

“This is my first World Tour victory and the circumstances make it really special,” McNulty said. “I had a crash in the echelons, and the GC was off, but I managed to recover and to take the victory todays is incredible.”

McNulty noted that he had considered leaving the race after the crash; staying in the mix obviously paid off.

He joined a sizable break that went clear on the Col de la Croix de Chauboret, and the peloton gave the escapees some breathing room off the front on the day’s up-and-down terrain. With just under 40 km to go and a healthy gap between the break and the pack, McNulty made his move on the Cat 1 Col de la Mure, surging away from the rest of the escapees to quickly build a big advantage.

He would hold on all the way to the line to take a convincing win. Bonnamour arrived at the line until 1:58 back with another American, Movistar’s Matteo Jorgensen, taking third on the stage.

After his win, McNulty pointed out that he had some familiarity with the day’s challenges.

“I realized this morning these were the same roads where I won the Faun-Ardèche Classic two weeks ago. The plan was to go in the breakaway, and I thought I was going to make it or die,” McNulty said. “I had great legs all day so I could make it. I kind of hoped to go solo when I attacked with 39 km to go. The course was either climbing or descending, and I wanted to go all out on the climbs and take less risks on the downhills, so it was better to go solo.”

That decision led to McNulty’s first victory in a WorldTour race and his third win so far in what has been an impressive early-season campaign, with McNulty taking one-day wins at the Trofeo Calvia and the Faun-Ardèche Classic and GC runner-up honors at the Volta ao Algarve. He will look to continue his strong run of form as ever-bigger goals loom, with the Tour de France and the Vuelta a España in his plans for later this season.

As for Paris-Nice, Thursday’s stage 5 saw the leader’s jersey change hands from one Jumbo-Visma rider to another as Wout van Aert dropped off the pace early, putting Primož Roglič into the yellow jersey. The 33-year-old Slovenian has a 39-second advantage to Simon Yates (BikeExchange-Jayco) with Pierre Latour (TotalEnergies) a further two seconds back in third heading into Friday’s stage 6. 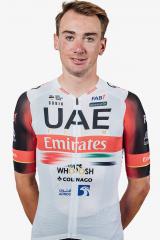