The best legs of her life and a smartly raced Strade Bianche for the whole SD Worx team led Lotte Kopecky to a phenomenal victory in Siena.

In just the third race of her season, Lotte Kopecky and her new SD Worx teammates used brains and brawn to take the biggest victory of the Belgian’s career at Strade Bianche.

After proving exceptional climbing form on the sixth of eight gravel sectors, clinging to the wheel of pre-race favourite Annemiek van Vleuten (Movistar), Kopecky put down a monstrous acceleration with 22 km to go, gaining up to 18 seconds on the way to the next stretch of white roads.

The Belgian national champion was caught by an ever-dwindling chase on the penultimate sector, and by 15 km to go SD Worx was still very much in control, Kopecky, joined by Demi Vollering, Ashleigh Moolman Pasio, and last year’s winner Chantal van den Broek-Blaak, who had already been on the attack.

One of the defining moments of the race came on the final sector of the iconic white roads where Van Vleuten made the move everyone had been waiting for, getting rid of everyone but Kopecky. With about 13 km to go, it looked remarkably similar to the final phases of Omloop Het Nieuwsblad when Van Vleuten and Vollering rode away to the finish. This time however, the pair would be chased down.

Despite the repeated accelerations from SD Worx and Canyon-SRAM, there were a remarkable 12 riders still in contention on the outskirts of Siena – the biggest number ever to make it that far.

Van Vleuten was the first to accelerate after the group passed under the flamme rouge, but Kopecky and Moolman Pasio would not let her go. The SD Worx pair shadowed the Dutch veteran as they ground up the final climb, and while the South African dropped back a little, the Belgian was unshakable.

The final corners proved decisive as Kopecky came round Van Vleuten, and then drove her out wide into the final curve. As the road dipped down into the Piazza del Campo, Kopecky came into her own, powering to take a famous victory.

Moments after Van Vleuten crossed the line in second, Moolman Pasio celebrated a one-three for SD Worx at the end of an exemplary race. 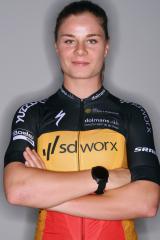