After a flurry of attacks by Tadej Pogačar (UAE Team Emirates) going up the Poggio came to nothing, it was a powerful surge off the front on the descent by his Slovenian compatriot Matej Mohorič (Bahrain Victorious) that ultimately proved the winning move on Saturday at Milan-San Remo.

The 27-year-old Slovenian made a big attack shortly after hitting the downhill inside the last 5 km of the race and immediately got a small gap. He extended his advantage over the ensuing minutes as he took no shortage of risks on the winding road down to San Remo. Even as the gradient eased off, a much-reduced group of chasers was unable to mount a coherent pursuit, and Mohorič took a handful of seconds into the last few kilometers.

He held on to take the victory ahead of Anthony Turgis (TotalEnergies), with Mathieu van der Poel (Alpecin-Fenix) securing his the final spot on the podium in his first race of the season.

Mohorič said afterward that he and his team had been eyeing this race for some time.

“Actually I was thinking about this race for the whole winter,” a smiling Mohorič said after the victory. “The team came up with the idea of using a dropper post because this race suits me pretty well and it has a descent at the very end. I knew that if I could train properly over the winter and try to be in a good enough condition to not be dropped on [the] Poggio, to be with the best guys over the top, that I have a chance of doing my best descent and risking a little bit but maybe being able to hang on for the win.”

A pileup earlier this year threatened to derail Mohorič’s plans, but he said that he remained optimistic.

“I was in perfect condition after I was ill in February for Strade Bianche but then unfortunately I had quite a big crash when [Julian] Alaphilippe crashed and I hurt my knee pretty bad, so I was off bike for three or four days, but I never stopped believing,” Mohorič explained.

“I said, ‘If we worked hard this winter and set up the bike and everything, then we need to make the best of it.’ I did a lot of physio every night, every morning. I never stopped believing.”

As the race headed into its finale, Mohorič stuck with a dwindling peloton that was chasing down escapees Alessandro Tonelli (Bardiani-CSF-Faizané) and Samuele Rivi (EOLO-Kometa). The pack drove a hard pace over the Cipressa, bringing the gap down to only around a dozen seconds as the Poggio loomed. The two breakaway riders were caught almost as soon as the road went up, and then Pogačar launched one attack after another after another. Wout van Aert (Jumbo-Visma) closed down more than one Pogačar attack, while his Jumbo-Visma teammate Primož Roglič put in a move of his own that was quickly brought back.

When the leaders went over the top of the climb, a handful of fast finishers were still in the group, but Mohorič worked his way to the front and then made his move. For all his confidence heading into the race, Mohorič wasn’t especially confident in his chances as the Via Roma approached. Obviously, things worked out in the end, with Mohorič managing to stay upright as he flew down the tricky descent and, despite a brief mechanical issue in the last kilometer, staying clear for the win.

“I did some basic training to keep as much condition as possible and today I am here,” he said. “I didn’t believe it – I was not going super well, but it was enough to hang on with the best throughout the Poggio and then I just went all in. I can’t believe it, I’m without voice.” 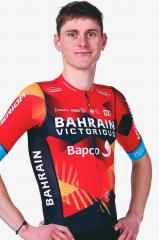