Vinegaard and Landa were able to maintain their second and third positions in the general classification. Tadej Pogačar started the final stage of Tirreno-Adriatico with a convincing one-minute 52 second lead on Jonas Vinegaard (Jumbo-Visma) and Mikel Landa (Bahrain-Victorious) and finished the stage the winner of the blue jersey.

Pogačar was able to defend his Tirreno-Adriatico overall thanks to a successful attack on the sixth stage of the race on Saturday.

The seventh stage focused on the sprinters, and it was the German Phil Bauhaus (Bahrain-Victorious) who bested Giacomo Nizzolo and Kaden Groves (BikeExchange-Jayco) to take the stage. The top ten of the general classification rode safely into the finish within the peloton.

“Today was quite good,” Pogačar said after the seventh stage. “More relaxed than days before, not so cold like before. In the end, I was a little nervous for the sprint, but I’m happy for us it was quite good.”

The run into the finish of Sunday’s stage included a few tight turns, and with a handful of sprinters keen to take stage honours, the finish could have been hectic. Israel-Premier Tech took control in the final kilometre to bring Nizzolo safely through the last corners. On the final straight, the first sprinter to take on the wind was Intermarché-Wanty-Gobert Matériaux’s Alexander Kristoff, but Bauhaus dodged through sprinters to cross the line first.

“I had a difficult winter, but I knew I’m in good shape, and the team did really good today,” Bauhaus said of the final stage. “We knew it was a headwind, so the plan was to come late.”

“I followed Démare and I saw the gap on the right side and I just went for it.”

Pogačar finished the week with two stage wins, after taking the Queen stage on Saturday and stage 4 on Thursday.

“Yesterday’s stage was one of a kind. Also the first stage I won was really beautiful. I’m super happy,” Pogačar said on Sunday.

With overall and multiple stage victories at Tirreno-Adriatico and the UAE Tour and dominant solo performance to take Strade Bianche Pogačar’s 2022 campaign couldn’t have started any better. The Tour de France champion was humble when asked if he is unbeatable.

“So far so good. We will see in the next races, some new challenges.”

One of the new challenges in question is the upcoming Milano-Sanremo. Pogačar already has people wondering if the youngster can add another Monument to his tally by attacking on one of the final climbs into Sanremo and staying away to the finish. 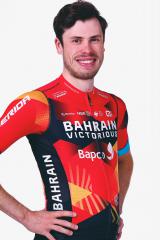