“Yesterday was too hard and we were focused today,” Jakobsen said at the finish. “We love echelons at Quick-Step, so we were in with four guys and I’m just happy I could finish it off for the team. “I have to say, I think the boys from Jumbo had the three strongest so it was definitely not easy, but as I said, we love echelons and we had a lot of motivation before the stage. Even though the legs hurt from 60 kilometers of full gas we could still make it and I’m happy I could win.”

With a little over 60 km to go crosswinds split the peloton into pieces. Some of the top general classification contenders were caught out, notably Brandon McNulty and João Almeida of UAE Team Emirates and Maximilian Schachmann (Bora-Hansgrohe). Luckily for Bahrain Victorious and Team BikeExchange Jack Haig and Simon Yates, who initially lost contact with the front of the race, were able to regain contact with the group containing their main rival Primož Roglič after some fervent chasing.

What was a two minute gap for the Schachmann group was eventually brought down to 89 seconds by the finish, but Jumbo-Visma put in the work for Roglič and yellow jersey wearer Christophe Laporte to remain at the top of the general classification battle. Wout van Aert snagged a couple bonus seconds and jumped over her teammate Roglič to sit second overall after the second stage.

Laporte took over the final leadout from Quick-Step Alpha Vinyl to try and get Van Aert a stage 2 victory, but Jakobsen was faster than the Belgian national champion and was able to come around him to take the win.

“The [Opening Weekend] was an aperitif now we have come to the starter, it’s nice and from here we keep going,” said Jakobsen.

The third stage of Paris-Nice starts out flat but ends with a series of category three climbs. The finish in Dun-le-Palestel is slightly uphill, so Van Aert could take the lead off his teammate Laporte if he makes it over the climbs. 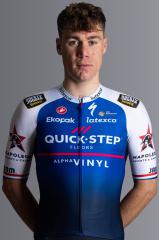 Christophe Laporte: 'Wout told me today that it was for me rather than for him'

Christophe Laporte: 'Wout told me today that it was for me rather than for him'