Remco Evenepoel, Jonas Vingegaard, and Tadej Pogačar took a star-studded trip off of the Tirreno-Adriatico race route on Friday, missing a turn and leaving the course for a few moments while hunting down a stubborn breakaway on stage 5. Although the trio quickly turned around, the brief foray off of the route may have been a boon for the escapees, who ultimately stayed clear, with Warren Barguil claiming his first WorldTour victory since 2017.

Some 6 km from the finish and approaching a punchy final climb, Evenepoel was leading a quartet that also included Marc Soler in pursuit of a break that held onto a gap of around one minute when the chasers arrived at what should have been a rightward turn in the course. Evenepoel, Vingegaard, and Pogacar missed the turn, while Soler realized what was happening in time to course correct.

It only took a handful of moments for the off-course riders to turn around, but the mistake saw the break’s chances suddenly boosted, and it also saw Evenepoel briefly dropped, as the Belgian had led the way in the wrong direction and taken the most time to realize what was going on.

“Fortunately, I had the legs to make up the gap, and also with some help of Ballero [Davide Ballerini], I managed to return in the pack, but it’s a pity how things turned out at a moment when they were looking so good,” Evenepoel said afterward, as VeloNews reports.

Up front, Barguil attacked on the run-in to the final climb with only Valentin Ferron able to follow, and then Barguil put in another surge as the road angled upward to leave Ferron behind. He made his way alone up the steep gradient with a handful of fellow escapees chasing and the GC stars only a little ways further back.

Barguil held on to take the stage win 10 seconds ahead of Xandro Meurisse, with Simone Velasco taking third at 14 seconds back. Richie Porte was the first of the GC contenders to finish, 26 seconds down in fifth, with Pogačar, Vingegaard, and Evenepoel arriving in a group a further two seconds back.

Pogačar finished the day with his race lead intact and a nine-second GC lead to Evenepoel. Thymen Arensman lost a handful of seconds to Pogačar and Evenepoel but moved up to third overall after Filippo Ganna arrived more than 19 minutes down. 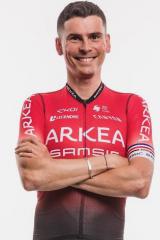