With Milan-San Remo around the corner, Caleb Ewan powers to a sprint win at Tirreno-Adriatico

Ewan's first-ever Tirreno-Adriatico stage win is his third victory of the 2022 season.

Two-time Milan-San Remo runner-up Caleb Ewan (Lotto Soudal) looks to be in good shape to make another bid for his first Monument win after he powered to victory on Wednesday’s stage 3 of Tirreno-Adriatico.

The 170km stage from Murlo to Terni came down to a bunch kick on a cobbled, slightly uphill finish. The Groupama-FDJ team led out the sprint for Arnaud Démare, but Ewan had other plans. The 27-year-old Australian surged to the front to take the win ahead of Démare with up-and-comer Olav Kooij of Jumbo-Visma finishing third on the day.

The win is Ewan’s third victory so far in the 2022 season, but his first ever at Tirreno-Adriatico.

“I’ve been coming for a few years and I’ve always had bad luck or lack of form,” Ewan said. “It’s a race where I wanted to win.”

He will be looking to continue that strong start in the remaining stages of the race before he shifts his focus to one-day action at Milan-San Remo, one of the major goals on his calendar each year. Ewan finished a very close second behind Vincenzo Nibali in 2018, and was again runner-up last year behind Jasper Stuyven.

“You always want to start the year really well and I’m happy with how this year started,” Ewan said. “One of my big goals for the season is next week so I’ll take a lot of confidence from this into that.”

Ewan will make his sixth career start in the Italian Classic on March 19 hoping to go one better than he has so far. 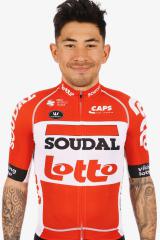