Still just 19 years old, Sheffield already has two wins under his belt in his first season with the Ineos Grenadiers. American up-and-comer Magnus Sheffield stormed his first pro one-day win at the Brababtse Pijl on Wednesday, capping off an aggressive day for the Ineos Grenadiers with another result in what has been a solid few weeks for the British WorldTour outfit. Sheffield, who will still be a teenager for another six days as his 20th birthday approaches on April 19, finished the day 37 seconds ahead of Benoît Cosnefroy (AG2R Citroën) and Warren Barguil (Arkéa-Samsic).

Tim Wellens (Lotto Soudal), who had initially crossed the line for third, was relegated after deviating from his line in the finishing sprint.

Sheffield played an active role in the final hour of the race, repeatedly trying to surge clear or join others in their attempts, and that strategy ultimately paid off. He jumped away solo in the last 3 km and held on to take a convincing win in Overijse in the Flemish Brabant region, becoming the first ever male American winner in the event’s lengthy history.

“I just felt unbelievable when I found myself off the front in the last kilometers, and I really didn’t expect to hold on,” he said.

“I just followed a move with [Tim] Wellens, and he swung off, and I found myself alone, and I kept going to force the others to chase. Everyone was looking at each other, and I just went full gas and put it in the biggest gear, and tried to make it to the finish.”

The win is Sheffield’s second already this season, his first at the WorldTour level. It is also the second one-day win for the Ineos Grenadiers in less than a week after Michał Kwiatkowski powered to his second career Amstel Gold Race win on Sunday. 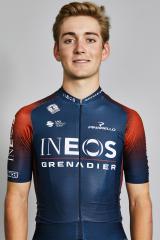