For the first time since 2014, a new winner of La Flèche Wallonne has been crowned.

Three days after taking fifth at Paris-Roubaix Femmes avec Zwift and a week and a half after winning her first WorldTour race Marta Cavalli added La Flèche Wallonne to her palmares. The FDJ Nouvelle-Aquitaine Futuroscope rider bested Annemiek van Vleuten (Movistar) and Demi Vollering (SD Worx) atop the Mur de Huy in an impressive show of strength and patience.

A selection of 15 riders containing a few strong climbers separated themselves from the peloton inside the final 40 km of the race. They managed to work up an advantage of over two minutes but once the race reached the final 20 km the gap dropped rapidly to less than 30 seconds thanks to the efforts of Brodie Chapman of FDJ Nouvelle-Aquitaine Futuroscope.

As the peloton closed in on the breakaway Anouska Koster, who started the race with only two other Jumbo-Visma teammates, tried to stay away from the chase.

Behind Koster, a selection of pre-race favourites led by Vollering detached from the rest of the race. Near the top of the penultimate climb, Ashleigh Moolman Pasio took a flyer from the group of favourites but Van Vleuten was quick to react.

With three riders in the final selection, Movistar took over the pace-making for Van Vleuten into the final climb. The former world champion set a pace up the climb that distanced the majority of the group and eventually attacked in the final 400 meters. Cavalli was the only rider to be able to match Van Vleuten’s pace while Vollering clawed her way back to the two.

Into the final 150 meters, Van Vleuten again tried to distance the Italian but Cavalli patiently waited for the climb to ease up before she made her final acceloration. Cavalli edged out Van Vleuten to win, with Vollering coming in ten seconds later for third. 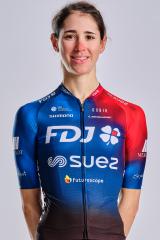