Longo Borghini makes it two from two for Trek-Segafredo at Paris-Roubaix Femmes with a spectacular solo effort. After a fast opening 40 km, the first cobbled sector – Hornaing: the scene of Deignan’s race-winning move last year – did some real damage, putting the early breakaway in trouble, and stretching out the Ellen van Dijk-led peloton that chased around a minute behind. By the halfway point, only Tanja Erath (EF Education-Tibco-SVB) survived at the head of the race, and her freedom would last just a few kilometres longer.

The first big move came on the four-star sector of Auchy à Bersée where Lotte Kopecky (SD Worx) accelerated off the front of the peloton, taking a super-strong Marta Bastianelli (UAE Team ADQ) with her. Lucinda Brand (Trek-Segafredo) made short work of chasing them down, while behind, the rest of the peloton was pretty well neutralised thanks to the overwhelming presence of Kopecky and Brand’s teammates.

The trio enjoyed the lead of the race for about 20 km, SD Worx and Trek-Segafredo – without Elisa Balsamo – carefully managing the small gap, and when the attackers were brought back, it was Elisa Longo Borghini (Trek-Segafredo) who jumped clear. Two riders attempted to bridge across, but they were soon back in the bunch.

The presence of two teammates in the chase gave Longo Borghini a significant advantage as the finale approached, her gap up to 40 seconds with 13 km to go. The addition of Chantal van den Broek-Blaak (SD Worx) brought more intent to the chase, but Longo Borghini would not be caught, staying away to enjoy her lap of the Roubaix velodrome.

Kopecky won the sprint for runner-up 23 seconds later, with Brand snatching third to join her teammate on the podium. 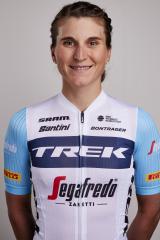