Remco Evenepoel soloed to a well-earned victory at Liège-Bastogne-Liège, adding a golden lining to what was almost another unfortunate day for Quick-Step Alpha Vinyl.

It took a long time for a breakaway to escape at the start of the race, but 11 riders finally broke free after about 40 km of the 257.2 km Monument. It wasn’t until almost 200 km into the race that the real action began.

With the gap dipping back under three minutes and 60 km to go, the peloton’s momentum was interrupted by a huge crash on the fast road to the Col du Rosier. EF Education-EasyPost was almost completely flattened, with many Trek-Segafredo riders also held up, as were Tom Pidcock, Alejandro Valverde and late call-up Brandon McNulty. In the same high-speed crash, Quick-Step Alpha Vinyl’s spring of bad luck looked set to continue with Julian Alaphilippe among the worst affected, the world champion leaving the race in an ambulance.

What was left of the breakaway finally shattered on La Redoute, and Bruno Armirail (Groupama-FDJ) had the privilege of cresting the iconic climb alone about a minute ahead of the bunch. Moments later, Evenepoel made his inevitable move in the peloton, a ferocious acceleration near the top of the climb that no one could match.

The young Belgian entered time trial mode, leapfrogging from one fatigued breakaway rider to the next. He gathered up Armirail just outside 20 km to go and let the Frenchman hang on until the last classified climb of the day. By the top of the Roche-aux-Faucons, Evenepoel’s advantage was over 30 seconds with just 13 km to go.

Attacks in the elite chase group behind halved the Quick-Step rider’s lead on the last unclassified ramp about 10 km from the finish, but once back on the fast open road, the 22-year-old was in his element. An emotional Evenepoel crossed the finish line alone, and the podium was fought over in a small group sprint 48 seconds later.

Second went to Quinten Hermans (Intermarché-Wanty-Gobert Matériaux) and Wout van Aert (Jumbo-Visma) made it a Belgian 1-2-3 with third. 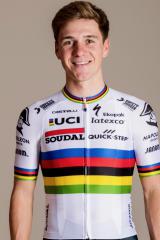