Sergio Higuita took the stage win and Aleksandr Vlasov finished just behind his teammate, moving up to third overall. Sergio Higuita took the win in the GC group sprint at the end of stage 4 of the Tour de Romandie, with teammate Aleksandr Vlasov sprinting to second for a Bora-Hansgrohe one-two.

The queen stage started in Aigle, the home of the UCI, and took in six classified climbs on the way to Zinal. The finish came after about 30 km of pretty steady climbing, with some of the toughest gradients in the last kilometre.

A large breakaway had got away after a rapid first hour – including Toms Skujinš (Trek-Segafredo) who will go into the final stage as KOM leader after today’s efforts – and it was gradually whittled down until just two riders remained at 10 km to go.

Einer Rubio (Movistar) attacked from the diminished GC group as the weary remnants of the breakaway were caught, and with Sepp Kuss leading the chase for race leader Rohan Dennis (Jumbo-Visma), defending champion Geraint Thomas (Ineos Grenadiers) finally dropped off the back after visibly struggling for several kilometres.

Rubio still had a narrow advantage going into the final kilometre and with the favourites looking at each other, it appeared to be his race to lose. But then Luke Plapp (Ineos Grenadiers), freed of team duties, accelerated again and the group swallowed up the small Colombian.

It all came down to that most precarious of finales: a climbers’ bunch sprint. With Juan Ayuso (UAE Team Emirates) glued to Plapp’s wheel, Higuita started his sprint from the left side of the group. Teammate Vlasov looked over from the other side of the road and matched the Colombian national champion’s pace all the way to the line, effectively blocking their rivals from coming through.

In the moment, it looked dangerously close to in-fighting, but the Bora-Hansgrohe pair celebrated together, Higuita claiming a memorable stage win, and Vlasov leaping up into third overall with second on the stage (losing out on four valuable bonus seconds…). After a confident performance, Ayuso found third just ahead of Ben O’Connor (AG2R-Citroën), which moves the 19-year-old Spaniard up to second overall and into the white jersey.

Dennis finished just three seconds down and will go into the final stage time trial – 15.8 km total: flat start then straight up a mountain (10.2 km, avg. 8%) – with a 15-second advantage over Ayuso. Vlasov, 18 seconds down, will hope that the bonus seconds he missed out on today will not prove costly on the climb. 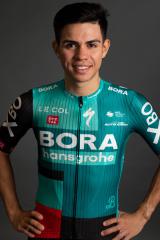