Martínez wrested the race from Evenepoel who struggled on the steep climbs as Ion Izagirre took stage honours on home roads.

Two days after winning the punchy stage 4 sprint, Daniel Martínez (Ineos Grenadiers) climbed to overall victory on the final day of Itzulia Basque Country, finishing fourth behind stage winner Ion Izagirre (Cofidis). The Basque rider’s win in Arrate was all the more deserving given that he’d hit the deck a few kilometres further down the final climb.

Martínez started the week as co-leader alongside Adam Yates in an Ineos Grenadiers team stacked with talent. The leaders had Omar Fraile and Tao Geoghegan Hart at their disposal, with young guns Ben Tulett and Carlos Rodríguez doing much more than making up numbers – the latter took his first pro win on stage 5’s uphill finish – and Geraint Thomas was there in an intriguing hybrid role that included road captain, breakaway rider and Tim Declercq mode.

By the end of the infamous Basque stage race, Martínez had returned to the top of the podium at a road race for the first time since joining the British outfit, and with third overall at this year’s Paris-Nice already under his belt, he’s put himself firmly in the fight for team (co-)leadership in the season’s bigger races.

Stage 6 of the 2022 Itzulia Basque Country was another climb-heavy affair, and with mere seconds separating the key GC players, it was sure to be an action-packed day. After a confident and steady performance on stage 5, Remco Evenepoel (Quick-Step Alpha Vinyl) was top dog at the start of the day, having taken over from Primož Roglič (Jumbo-Visma), whose bad Friday lost him the race lead he’d owned since day one.

The 135.7 km route started in Eibar and finished in Arrate, taking in no less than seven categorised climbs along the way. Though none of them peaked out beyond 700 m, nor were they very long, they all featured painfully steep sections characteristic of the area, the last Cat 1 climb topping out just inside 2 km to go. In short, not the terrain Evenepoel would have chosen for the defence of his race lead.

There were six world-renowned climbers within 40 seconds of the yellow jersey, but Martínez was his closest rival at just two seconds adrift. With that in mind, it will have come as no surprise that the Colombian’s Ineos Grenadiers teammates assumed their familiar position on the front of the peloton from early in the day – a sign of things to come.

With the splintered breakaway still up the road, an attack from Roglič – working for Jumbo-Visma’s leader-elect Jonas Vingegaard who sat sixth overall – finally drew out the GC riders on the Krabelin climb with 40 km to go, and Evenepoel was distanced.

25 km of frantic chasing later, he was able to ride himself back into the game, but he had no teammates left and plenty of steep gradients up ahead. The 22-year-old did everything he could to stay in yellow, including sprint for maximum bonus seconds 9.1 km from the finish, but the last ascent was one too many for the young Belgian.

Davide Formolo (UAE Team Emirates), who’d spent the day in the breakaway before being caught inside 30 km to go, attacked again at the foot of the 4.6 km Usartza climb, making no effort to hide the pain inflicted by its steep gradients, which also put an end to Evenepoel’s day moments later.

Ultimately it came down to a battle between Izagirre, Martínez, Aleksandr Vlasov (Bora-Hansgrohe), Marc Soler (UAE Team Emirates) and Vingegaard, all of them in the GC top 10.

Local rider Ion Izagirre looked one of the more sprightly of the group, but his hopes were almost derailed by the second Vingegaard-related mishap in as many days. His head down, the Dane swerved to the left while in the middle of the group, sweeping Izagirre’s front wheel out from under him. Similar had happened 24 hours earlier on the punishing stage 5 finish, gravity and the gradient robbing Vingegaard of his balance, and sending him sprawling into Vlasov. Such was the steepness of the ramp that the pair had to push their bikes over the finish line.

Luckily for Izagirre – and Vingegaard – he was relatively unharmed and was able to remount and reconnect with the group in short order. The 33-year-old knew that to win meant to lead into the final corner, and he did just that, powering to the line for a well-deserved win. Izagirre also climbed onto the overall podium, finishing second to Martínez who took his first GC win since the 2020 Critérium du Dauphiné. Vlasov’s six-second bonus for second on the stage moved him into third overall, while Evenepoel slipped to fourth. 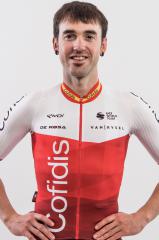